GRNews
GreekReporter.comEuropeAntonis Samaras Says 'Resurgence in Relations Between Greece and Russia is Essential' 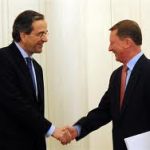 During the meeting between New Democracy (ND) leader Antonis Samaras and the Chief of Staff of the Presidential Administration of Russia Sergei Ivanov held at the Kremlin, Antonis Samaras emphasized that resurgence in Greek-Russian relations is essential in these crucial times that Greece is facing.

Antonis Samaras also thanked Ivanov for his warm reception, adding that friendship still exists between Greek and Russian people, and also between the political representatives of the two countries and the New Democracy and ruling United Russia parties.

Moreover, Samaras said that the development of Greek-Russian bilateral relations is absolutely necessary now that humanity is facing difficult times. ” Cooperation is needed so as to restore the harmonious relationship between Greece and Russia”, Samaras underlined.

On his part, Ivanov praised the close cooperation between ND and United Russia both at party level and at leader level, noting that there is a wide range of prospects for the development of relations between the two countries in all sectors, including the economy, politics and culture.