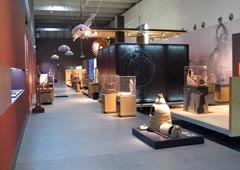 The Technology Museum has been active in Northern Greece since 1978. During those years it has passed through various stages of development. To date, over 1.500.000 individuals – most of them young people – have taken part in its various activities and have found the museum’s environment to be ideal for finding out about, and involving themselves with, the modern technological culture.
The Technology Museum was established in November 1978, after two years’ research and preparation by a small team of educators, engineers, and businessmen, on the initiative and through the efforts of its subsequent director, Mr. M. Iatridis. The founders shared a vision of a cultural body existing to educate the general public, but mainly school children and students, on subjects associated with Science and Technology.
After the completion of the new facilities and the establishment of the foundation “Thessaloniki Science Center & Technology Museum” (short title Noesis) in 2004, the Technology Museum granted its exhibits and assets to the new foundation. Since then, the board of directors of TMTh and some of its members have founded the “Friends of the Technology Museum of Thessaloniki” association. The purpose of the association is to support the activities of Thessaloniki Science Center & Technology Museum – Noesis.
The Exhibitions are presented on topics related to Science and Technology:
1. The “Classic Cars Exhibition” exhibit, featuring car models that mark the history of automobile. The exhibition consists of 5 main thematic units, based on the 5 top car models of the 20th century.
2. The “Technopark” exhibit, featuring interactive (hands-on) exhibits. The visitor has the opportunity to discover scientific knowledge through acting and having fun.
3. The “Ancient Greek Technology” exhibit, a one of a kind show, refers to the years between the prehistoric period and the Hellenistic and Byzantine period. The exhibition features more than 70 exact replicas of machines that have marked people’s lives and set their cultural context, as well.
4. The “Image and Sound” exhibit, featuring the technology of photography, radio and television (it is currently under study).
All the exhibitions are complemented with a personal audio tour guide system, available in both Greek and English.