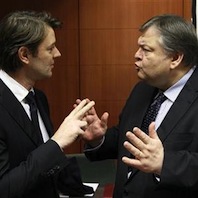 Euro zone finance ministers rejected an offer made by private creditors to restructure Greece’s debt and if a resolution is not reached by March, when Athens must repay 14.5 billion euros ($18.9 billion) of maturing debt, a messy default could occur.
“Greek debt payments are looming and the situation needs to be resolved. We are concerned about financials that still need to raise capital,” said Andrea Williams, who manages $2.1 billion in assets for Royal London Asset Management.
Juncker said after the talks that future interest rates on the longer-term swapped Greek bonds would have to average “clearly below 4 percent,” apparently siding with the Greek government’s stance that the interest should be between 3.5 and 4 percent.
Private lenders argue that the minimum repayment rate should be 4 percent.
A Greek finance ministry official told the dpa news agency after the talks that Athens would submit its final offer to its lenders by February 13. European officials had earlier hoped that the deal would be finalized in time for EU’s special debt crisis summit in Brussels on January 30.
The private sector write-off is one of the EU’s preconditions for Greece’s second set of emergency loans worth 130 billion euros – credit that the country needs to avoid default.
(source: AP, dpa, Reuters)