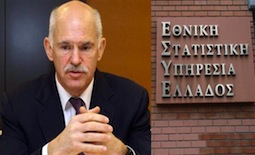 On Friday, financial prosecutor Grigoris Peponis submitted his initial findings on the Hellenic Statistical Authority (ELSTAT) case file to the country’s Supreme Court.
According to a former employee of ELSTAT, Zoe Georganta, the statistics service had “cooked” the country’s public deficit numbers in order for the government to impose harsher austerity measures. Mrs. Georganta’s allegations were later on supported by the former president of ELSTAT Nikos Logothetidis as well.
Now, Supreme Court prosecutor Nikos Pantelis is expected to examine the case file and decide whether he will refer it to Parliament or not. Mr. Peponis suggested that the case file should be referred to Parliament, in order to shed light on any possible connection between former PM George Papandreou and former Finance Minister George Papaconstantinou to the case.
Mr. Peponis highlighted that Andreas Georgiou, head of ELSTAT in 2010, did not provide him with further evidence on the case.
PASOK spokesperson Panos Beglitis made a formal announcement concerning the possible charges George Papandreou might be facing in the future, and openly criticized the way in which Peponis was interfering with the political and economic life of Greece.