GRNews
GreekReporter.comGreek NewsGreek Pottery to Be Exhibited in Taiwan

Greek Pottery to Be Exhibited in Taiwan 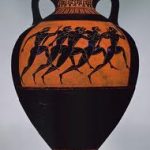 A rare collection of fresco wall paintings and Greek pottery from the Louvre will be among 100 works from seven French museums that will go on display in Taipei starting Saturday, the National Palace Museum (NPM) said on Thursday.

The exhibition, titled “Western Mythology and Legends: Selected Works from the Louvre Collection,” will feature ancient Greek pottery, frescoes from the ancient city of Pompeii, and 16th to 19th century paintings and sculptures, NMP officials said at a press conference.

The frescoes, dating back to the first century, were unearthed in Pompeii in 1755 and were given as a diplomatic gift by Ferdinand IV of Naples to Napoleon I of France, who later gave them to his wife, Empress Josephine.

Also on display will be a painting of Mount Olympus around the 1720s by Francois Lemoyne; another portraying Apollo revealing his true identity to a shepherdess, by Francois Boucher in 1750; and a red-figured cup by Greek potter Brygos, showing the capture of Troy.

The exhibition will be organized into five themes-Mythic Origins: From a Chaotic Universe to Mount Olympus; Who’s Who of Mythology: the Gods of Olympus; Love Among the Gods: Uncontrollable Passions; Heroic Epics: From Homer to Virgil; and Immortal Myths and Legends: From Antiquity to Modernity.