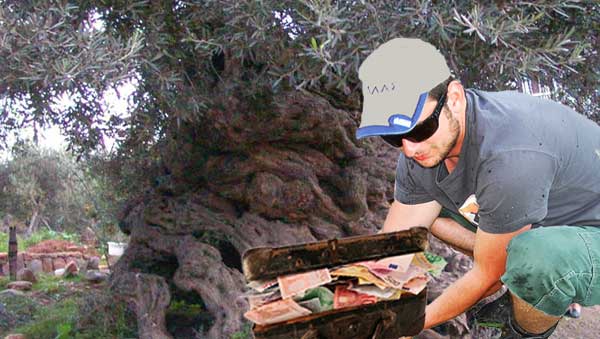 From wealthy businessmen to ordinary grandmothers with 500 euro pensions, Greeks are taking their money and running, moving it abroad or even burying it under their olive trees for fear that within the next few months their precious Euros will be converted to worthless drachmas.
In the box
Safety-deposit boxes of all sizes and designs have become the most sought-after financial products in the country. Worried about whether the banks will stay in business, Greeks have been taking their life savings out of accounts and sticking them in metal slits in basement vaults.
The boxes are so popular that banks have doubled the rent on them in the past year – and still every day between five and 10 customers request one.  In fact, some banks have ran out of spares. Bankers in Greece say worries about the survival of local banks, coupled with a rise in burglaries, has helped trigger a surge in demand for safe deposit boxes for those who have yet to set up accounts outside of the country.
Under the (tax-free) pool
Greeks are known for being innovative when the need arises. For those (lucky) ones who have big fat accounts, the bank safety deposit box is simply not enough to contain their money, so they are basically building their own boxes in order to protect their cash. In wealthy suburbs like Kifisia and Vouliagmeni, which are full of opulent mansions and villas surrounded by high walls, some residents built safes under their pools and others dug deep under their tennis courts. Needless to mention that one of the reasons they are so rich and can actually afford buildings safes under their pools is that rather than paying millions in tax to the Greek state, as they rightfully should, many of them are living entirely tax-free.
Under the bed
But it’s not just the rich that are withdrawing their money from the banks. Ordinary Greek grandmothers now join the wealthy in seeking sanctuary from economic chaos and hide their precious Euros under the bed, or bury them in their gardens. Due to this situation, banks have embarked on an interest rate war, with some smaller institutions sweetening terms to up to seven percent to woo customers.
Bankers said although clients were less panicky than during last September and October, demand remained high for foreign currencies such as the Swiss franc, U.S. and Australian dollars, and even Norwegian crowns — or gold.
(Sources: Reuters, Guardian, Ta Nea)