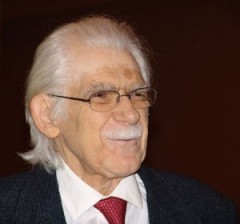 Dan Georgakas, the Director of the Greek American Studies Project at the Center for Byzantine and Modern Greek Studies, Queens College (CUNY), and a film critic and author (in his own words, “a public intellectual”), is increasingly visible as a most valuable asset to the Greek American community.

Professor Georgakas, who suggests a bi-cultural identity as a means of perpetuating Greek American culture – a “neo – Hellenism” that has closer contact with Greece and a revival of Greek in America as a second language – received large-scale tribute at two important events in the last months.

At its biannual symposium at New York University on Oct 15, 2011, the Modern Greek Studies Association held a panel on his life work titled, Retrospective on Dan Georgakas, citing him as “an organic intellectual of the working class”, and only a little over a month later, in Washington, D.C., Georgakas, a Keynote Speaker at the dinner of the American Hellenic Institute Foundation’s Tenth Annual Conference on the Future of Hellenism in America on November 19, was presented with the Annual Hellenic Heritage Public Service Award for the Promotion of Hellenism in America.

His talk, The Now and Future of Greek America, provided an overview of both positive and negative trends and statistics regarding the strength of the Greek American community’s identification with its Hellenic roots.

In regard to the future of Greek America, Georgakas thinks that “the term ‘Greek American’ is now “suicidal”, as it means being an American of Greek origin, and with an increasing marriage rate between Greeks and non-Greeks in the US, the Greek component is likely to perish.

Georgakas is an editor of Cineaste, America’s leading magazine of the arts and politics of cinema, since 1969. He writes about various categories of films, but in recent years Georgakas has focused increasingly on Greek film, and as one of the founders of the New York Greek Film Festival, continues to assist in its annual programming. He edited the guide to Greek film just published by Oxford Bibliographies on Line (OBE): Cinema and Media Studies, and co-edited a recent double issue of The Journal of the Hellenic Diaspora (of which he is an editor) that is totally dedicated to Greek cinema.