Papandreou Changes His Mind, Refuses to Step Down as PASOK Leader 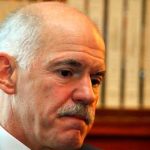 ATHENS – PASOK Socialist leader George Papandreou, who had promised to step down so that his party could have a new leader and candidate for Prime Minister in elections scheduled for April, said he won’t give up just yet and wants to stay on until the coalition government can reach a deal with international lenders to secure a second bailout for Greece in order to keep from defaulting, and achieve a 50 percent write down of its debt. Papandreou, who resigned as Prime Minister on Nov. 11, 2011, had previously indicated he was willing to step aside so that the party, whose approval ratings have fallen to 15 percent after his two-year tenure which forced waves of punishing pay cuts, tax hikes, slashed pensions and scores of thousands of layoffs of public workers on the Greek people, could have a new leader.
But on Nov. 14 he told the party’s National Council that he won’t go until Greece gets the new bailout deal, creating a schism within his own party with officials that said he is bringing down PASOK by staying on as a former Prime Minister who was hounded out of office by protests, riots and strikes. Finance Minister Evangelos Venizelos, who has imposed most of the tax hikes and wants to be the party’s candidate for Premier, rejected Papandreou’s plan, setting up a great divide within the party just when it didn’t need it, as the rival New Democracy conservatives are forging ahead in polls. Unless pushed aside, Papandreou could remain as PASOK leader until just before the elections, giving his party little time to field a candidate unless it agrees to a dual leadership in which he would be the party’s leader but not the candidate for Prime Minister. After Papandreou’s announcement, Venizelos said he would now not take part in the procedures for the election of a new PASOK President.
Papandreou insisted that the new party leader must be chosen in March from the grassroots party members, and only after the completion of negotiations on the country’s debt swap and the signing of the new loan contract.  Those have been stalled as investors are balking at taking big losses on their loans to Greece. Papandreou said that the elections will take place in late April. They had been scheduled for Feb. 19, but were pushed back because the coalition government led by former European Central Bank Vice-President Lucas Papademos has been unable to make any progress in talks with international lenders while his administration members are squabbling, so elections have now been shifted to late April.
There was no reaction from New Democracy leader Antonis Samaras, who insisted the elections have to be held before Easter on April 15. Papandreou was steadfast in his opinion. “I will not consent to any proposal that is not in harmony with the country’s needs and democratic achievements such as the election from the grassroot members and the citizens,” he said. An apologetic Papandreou admitted that the only thing his government achieved was to avoid a disorderly default and once again put a fair share of the blame for the current fiscal problems on the New Democracy government, which was in power from 2004 to 2009. “Committing errors is natural when you decide to act,” he said. “The memorandum with our creditors did not solve the problems, but we did not default. However, our country has not yet avoided the risk.”
Addressing his critics inside the party who call for his immediate departure, Papandreou showed a combative face, stating: “You must take all timetables and ambitions out of your mind. You should listen to a man who has lived it all within two years,” he said. The newspaper Kathimerini reported that he struck an unusually populist note in attacking Germany and Chancellor Angela Markel, whose country is putting up most of the $152 billion in loans to save Greece,  saying, “They have a costume for Europe that is tailor-made in order to avoid a new Greece. They did not believe that we wanted to put our house in order after what they had seen until 2009. Conservative Europe has failed.”
He went on to attack the media that applies pressure on politicians and, as he usually does when he wants to make the traditionalist wing of the party close ranks, made an emotional reference to his father, the three-time Prime Minister Andreas Papandreou: “As for the cowardly attacks on my family, I will answer using a phrase of Andreas: You want to hit me? I’m here!” He added: “I do not know whether I will win the battle but I will fight; and that is from any post, be it within or outside of Greece,” he vowed.
In his speech, Venizelos, who several years ago failed in a bid to replace Papandreou as party leader, said that the former Premier had promised to step down and was now reneging. Venizelos promised to do his duty as Finance Minister and said the next few months will decide whether Greece survives economically or goes under. If talks for a second bailout of $169 billion and debt write-down fail, it will disrupt Papandreou’s planned schedule and could make the elections moot as Greece will go bankrupt.