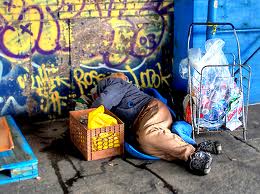 The Health Ministry is collecting data to proceed with a plan for legislation to secure state aid for homeless people in Greece.
Presenting his proposed document to the Parliament on Thursday, Deputy Minister of Health Mr. Markos Bolaris suggested passing a legislation classifying homeless people as a special social category which requires state aid and protection.
According to the data already collected, the number of homeless people is steadily rising, while the traditional profile of homeless people is changing.
In the past year of recession and social turmoil, homeless people have doubled in Greece and the stereotype of a socially marginalized person living on the streets is no longer the common characteristic of the phenomenon.
“Besides the vulnerable social groups, such as Romas, immigrants, refugees, abuse and trafficking victims, young offenders, substance abusers and mentally disturbed people, a category of ‘new-homeless’ people is emerging, who have found themselves suddenly unemployed, without home or without family support” pointed out Mr. Bolaris.
Mr. Bolaris referred to a 2009 survey conducted by the National Centre of Social Solidarity and the local authorities of the Greek Prefectures, which counted 21,126 people as homeless or living under unsafe conditions. The survey was not joined by all Prefectures, and thus current data is not reflective of the true dimensions of the problem.
Therefore, the Ministry has decided to start a new data collection across Greece to try to fully depict the homelessness problem.