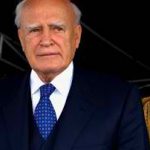 The 21st anniversary of “Omonoia” Democratic Union of the Greek Minority was celebrated in Dervitsani, Albania, with participation from both “Omonoia” members and representatives of the Greek State.

Prior to the event, the Divine Liturgy was conducted at the Dormition of the Virgin Mary Church, headed by Metropolitan Demetrios of Argyrokastro, followed by a memorial service for the departed founders and fighters of Omonoia.

A message of unity and support to the political representative of the Minority from the President of the Hellenic Republic, Mr. Karolos Papoulias, was read by Consul General Mr. Kotrokois, who also conveyed the greeting message of Deputy Foreign Minister Demetris Dollis. A message was also sent by the 1st Deputy Speaker of the Hellenic Parliament, Mr. Gregoris Niotis.

Omonoia President, Mr. Vassilis Bolanos, spoke on the history, work and struggles of the organization, while KEAD President, Mr. Doules, referred to the need for genuine unity, based on specific objectives. Furthermore, Mr. Doules spoke extensively on the census issue, stressing that “the struggle we started will go on, with appeals to the European Court of Human Rights and our own decision for a N. Hellenism 2012 census”.