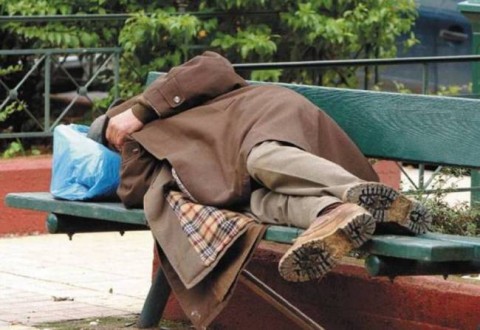 Lying on a bench right next to the central Christmas tree of the town of Chania, a 63-year-old homeless man was found dead last Saturday evening, according to an Ethnos daily report.
Unfortunate Mr. Michalis, as his name was, froze to death after the past days of cold weather conditions and famine. Covered in two soaking blankets, Mr. Michalis was found at 8:30 p.m. by a nearby kiosk owner, who knew the deceased man and wanted to ask him how he was doing.
When the kiosk owner approached Mr. Michalis and the latter did not respond, the police were immediately informed, and proceeded to call the ambulance because the man’s body was still warm but had no pulse.
Mr. Michalis was attended to in the hospital, where his death was confirmed.
Mr. Michalis was one of the most well recognized people of Chania. Only a few people knew his name and even less knew his life story. Most ordinary people and local authorities knew the man, who slept on the benches of the Municipal Market, by sight. Mr. Michalis used to ask passersbys for a smoke, while he visited the food banks of the town to get a free meal.
Without children or family of his own, people living in his village, Kournas, told Ethnos daily that Mr. Michalis was a good man full of humor, who once in a while visited his relatives living in the village. No one knew what made him sleep alone on the streets besides poverty.
More and more people are ending up homeless across Greece and especially in the capital, where numbers of the new-age poor have risen by 20% within the past few years. According to estimates, approximately 20.000 people are living on the streets, in abandoned warehouses, houses and buildings. Over the past months, the number of people attending food banks in search of a free meal have increased to four times.