GRNews
GreekReporter.comEuropeGreek Chorus to Perform in Festival of Sacred Music in Moscow

Greek Chorus to Perform in Festival of Sacred Music in Moscow 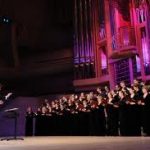 The International Christmas Festival of Sacred Music opened on the 8th of January in Moscow. It features music from different traditions including the Old Believers, American gospel songs, Byzantine chants and traditional French songs.

For the first time in Moscow, performances of the Greek chorus “Ergastiri Psaltikis”, the French Abbey Choir Silvanes, and the American choir “Alliance” will be included in the program.

The premiere performance of the new composition of Metropolitan Hilarion Alfeyev, called “Stabat Mater”, is scheduled during the festival as well.

From the 8th to the 22nd of January there will be 7 Christmas concerts held as part of the festival.