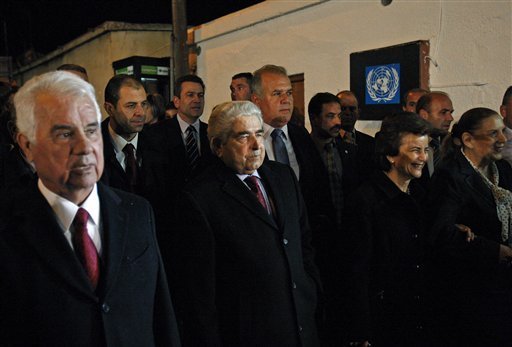 A dinner hosted by Cyprus President Demetris Christofias and Turkish Cypriot leader Dervis Eroglu for the UN team in Cyprus was concluded late on Thursday evening at the village of Pyla.
Cyprus President Demetris Christofias and Turkish Cypriot leader Dervis Eroglu expressed their hope for a comprehensive Cyprus settlement, saying this could be achieved even within 2012.
Statements were made by the two Cypriot leaders while hosting a dinner for the members of the UN team, during talks for a Cyprus solution in the village of Pyla, inhabited by both Greek Cypriots and Turkish Cypriots.
The dinner was attended by the spouses of the two leaders, as well as the Special Advisor of the UN Secretary General Alexander Downer and UN Special Representative Lisa Buttenheim. The two Cyprus leaders earlier visited the village square, where they were received warmly by the residents of Pyla. The dinner followed afterwards in a Greek Cypriot restaurant at the village square.
After the dinner, the leaders of the two communities and their invitees had coffee at a Turkish Cypriot establishment, without making further statements.
President Christofias said in his address that he hoped 2012 would be the year of the solution, adding that this is definitely a possibility. He noted that despite the problems, “we shall work more intensively to find a common language, the Cypriot language” in order to overcome the difficulties.
Furthermore, he thanked the UN “for working with us in this longstanding issue”, adding that a Cyprus solution would give the international organisation the ability to work in other areas of the world, where other peacemaking operations are required.
On his part, Turkish Cypriot leader Eroglu said he agreed with all that President Christofias said, noting that since he was the “elected” leader of the Turkish Cypriots, it has been his duty to continue the negotiation process in order to find a viable settlement in Cyprus.
“I do believe that with our strong efforts, both Greek Cypriots and Turkish Cypriots can find a comprehensive settlement on this island”, Eroglu said.
Downer, while addressing the dinner, said that one of the very striking characteristics of Cyprus, “this beautiful island”, is how warm, friendly and extremely hospitable people are, noting that you won’t find warmer and friendlier people anywhere but Cyprus.
He went on to say that it would be a wonderful thing for the international community to achieve an agreement in Cyprus with the establishment of a bizonal, bicommunal federation.
“We feel in the UN we are doing as good and worthwhile work as we can, to try to achieve this”, he said, adding that the UN is aware of the difficulty of the task.
He continued by saying that he dreamt of the day when the two leaders, Christofias and Eroglu, will be on the front page of “Time” magazine, as the two people who reached an agreement in Cyprus, resulting to the island’s reunification. “I think all this is possible”, Downer concluded.
(source: cna)