TechNews
GreekReporter.com Greece The Back Door, the Vested Interests, and Why Greeks Can't Trust Their...

The Back Door, the Vested Interests, and Why Greeks Can't Trust Their Media 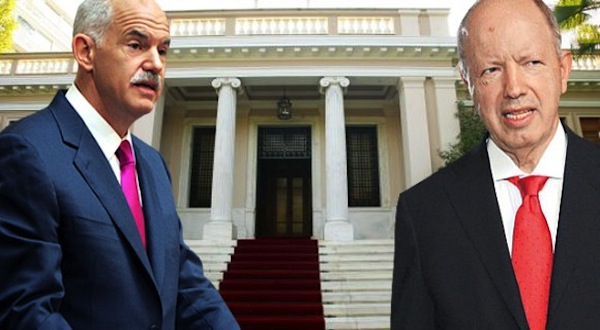 Greek media’s standing with the public has fallen sharply from its high during the ‘90s and the ‘00s.  The falloff in trust stems from the vilification of the news media by politicians, combined with a host of other scandals and the nation’s crisis-hit mood. The Papandreou-Psicharis dispute last Wednesday basically killed any credibility left both in the Greek media and Greek politicians as disgusted Greeks read about their former PM’s “negotiations” with the man who supposedly publishes Greece’s most credible newspapers.
Papandreou in Panic (again)
In his address to PASOK, panic-ridden Papandreou used the chance to attack the so-called vested interests that have fought against him and did not support him.
He lashed out against Stavros Psicharis , the publisher of DOL media group, who basically owns Greece’s two leading newspapers, To Vima-the Greek equivalent of the Times, TA NEA, and the country’s No. 1 television channel Mega TV.
Papandreou claimed that Psicharis had requested a loan from a large bank, and when he did not meet the conditions and his request was rejected, he started attacking Papandreou’s government. Papandreou and his allies basically argue that Psicharis’ newspapers and TV channel suffer from an “anti-Papandreou bias”. What’s rather contradictory is that up until a couple of months ago, Mr. Psicharis’ TV Channel Mega was widely accused of suffering of “pro-Papandreou bias” and for playing a role-the key role actually- to promote government propaganda in favour of the International Monetary Fund, even producing videos supporting Maximou initiatives and then disguising them as television news reports.
From the back door
Psicharis answered back with a statement on Wednesday night, saying: “It is true that DOL requested a loan from the National Bank, of which we have been clients for the last 90 years. Officially the bank said no. Informally they told us that it was not approved by Maximos Mansion. It is clear that interventions in the banks against newspapers that do not meet the wishes of the rulers show a fascist mindset. It is obvious that along with power, memory is lost too, even of very recent events. Papandreou is asked to indicate the circumstances under which we met last time at Maximos Mansion and why we were asked to go in through the back door.”
While Psicharis issued this statement to defend himself, what really struck Greeks is the “negotiations” between the country’s PM and a leading publisher – from… the back door! The notion that instead of high qualitative journalism, crisis-hit Greek readers are basically fed biased news from armies of press aides, pseudojournalists, and well-funded advocacy groups, and can’t even trust “high status” newspapers like VIMA in order to learn the real facts about the country’s tragedy, is a tragedy in itself.
But this is a lose-lose situation for Greek readers. On the one hand they have no reliable media to learn why their lives are being racked, and on the other, Papandreous’ argument that the press is a filter that must be circumvented to get his own message out to the public is predicated on the conviction that there is no such thing as truly independent reporting, or even a set of mutually agreed-upon facts. By undermining the credibility of the news media, politicians get the upper hand, undermine journalists, and muzzle the truth.
Indeed, one of the favorite mantras of  both ND and PASOK administrations after the collapse of the junta in 1974 is that the media suffers from ” bias” – a continuously repeated accusation designed to drill this notion into the public consciousness while putting the press on the defensive.