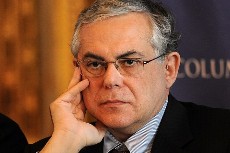 Greece faces the risk of a disorderly default in March if it doesn’t complete negotiations for the country’s second bailout starting later this month, Prime Minister Lucas Papademos said Wednesday.
In a copy of his comments made in meetings with employer and employee groups, Papademos said the coming weeks and months are “exceptionally crucial” for the country as Greece needs to secure funding from European peers and the International Monetary Fund.
Among the financial pressures faced by the heavily indebted government are EUR14.5 billion of bonds expiring in March.
“As a result of our actions and decisions in coming weeks, everything will be decided,” he said. His comments are in line with stark warnings from other government officials stressing the gravity of talks with representatives from the European Commission, International Monetary Fund and European Central Bank on Greece’s second bailout worth EUR130 billion.
Details of the deal, which comes after a first EUR110 billion bailout in May 2010, remain unsettled, particularly a provision calling on creditor banks to write down a significant portion of their Greek government bond holdings.
Earlier, labor union leaders cited the prime minister as saying that the Greek government appears to be nearing a deal with banks on a debt plan and developments are expected in the next 15 days.
Until this week, Greek officials have avoided raising the possibility of Greece leaving the euro zone and returning to its own currency, a process that could cripple the Greek economy and its financial system. However, the stakes are rising as Greece pushes the sensitive issue of reducing private-sector salaries, under pressure from creditors to quicken reforms.
Private-sector labor union GSEE said the government has instructed them to start discussions with employers on ways to reduce costs. GSEE General Secretary Nikolaos Kioutsikos said the talks will run until the start of February and cover lowering the minimum salary and reducing annual pay by up two months. “As Papademos told us, there are no barriers to these cuts,” he told reporters.
GSEE rejects any talk of pay cuts and will propose ways to lower other costs and protect jobs. The IMF has been pressing Greece to move more aggressively in liberalizing its labor market and opening up private-sector professions that are now protected by a web of restrictions that curtail competitiveness.
According to the Prime Minister, significant changes are needed to help secure a positive review from creditors and Greece can’t hope for a sustainable recovery without a boost to competitiveness. Greece’s cabinet is expected to convene Thursday and will discuss the deregulation of road transport industries affecting trucks and taxis.
(source: Dow Jones)