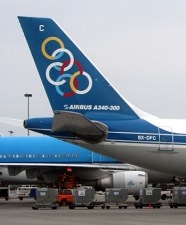 Clarifications regarding the sale of four disused Airbus A340-300 jets that belonged to the fleet of Olympic Airlines, the former national carrier, were finally announced on Tuesday by the Ministerial Committee for Privatisations and Restructurings (DEAA).
In a statement, the DEAA underlined that the sale of the airplanes was made within the framework of the privatization programme provided by the medium-term fiscal strategy programme, stressing that the sale constitutes an obligation undertaken by the country in compliance with the cooperation memorandum signed with the troika (EC-ECB-IMF), which is constantly examining Greece’s progress regarding its deadlines.
The four Airbus A340-300 jets were sold in August 2011 to Apollo Aviation Group, who offered the highest bid at 40.4 million dollars.
A previous open international tender announced in late 2009 was declared void after the highest bidder (Cirrus International), which had offered 97 million dollars, withdrew its interest due to inability to finance the transaction.
The statement emphasized that the international market for this type of airplane is shrinking because the planes are considered high-maintenance, so their production has been interrupted by the Airbus company. Also included in the statement was the concern that any further delay beyond the deadline set by the medium-term programme could carry the risk of being forced to sell the airplanes in question at an even lower price.
(source: ana-mpa)