Wynwood Walls began in Miami, FL, in 2009, when Tony Goldman and Jeffrey Deitch (of the famous Deitch Projects Soho and current Director of the Modern Art Museum in L.A.) decided to transform the warehouse district of Wynwood with the help of well-known graffiti artists into a giant street art project.

Artists like Futura, Shepard Fairey, the Os Gemeos and many others responded to the invitation and the project was not only granted with success but was also included in the highly important Art Basel Miami exhibition.

Two years after, Tony Goldman and his co-partners decide to bring to Miami artists, who have not had the chance so far of presenting their work to the American public. Among these are two Greek well-known graffiti artists, b. and Stelios Faitakis.

Graffiti works of the two young men have decorated many walls not only in Athens downtown but also in different countries around the world. According to b., “Street art, as people tend to call graffiti, is freedom”. With a highly critical point of view, b. draws his inspiration from the TV and commercials. “Over-consumption and manipulation of the public through the television forces me into properly commenting everyday issues, being ironic about them and expose this side of our reality” points out b., adding that even the architectural design of supermarkets or the way products are being promoted is enough for him to depict on the wall the clear message of guidance.

The whole project has become a documentary film entitled as “Here comes the neighborhood”. With 4minute long videos uploaded in vimeo, the documentary includes interviews of the curators and the artists, pictures of Martha Cooper, who has been covering the Wynwood project since the very start, and impressive shots from the graffiti creation procedure.

Some of the works of b. and Stelios Faitakis: 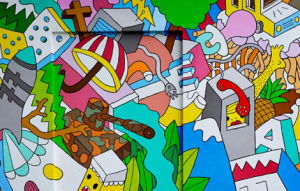 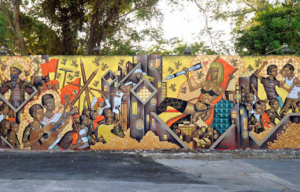