GRNews
GreekReporter.comGreeceEleftherotypia Newspaper to be Included in Article 99 of Hellenic Bankruptcy Code 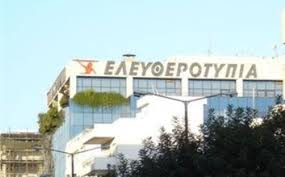 Eleftherotypia, which is one of the largest newspapers in Greece, is facing potential closure. Eleftherotypia publisher Mania Tegopoulou filed for protection from the daily’s creditors under Article 99 of the Bankruptcy Code.
The Code stipulates that employees and other interested parties cannot request or seize assets of the company in trouble until a recovery programme is applied and until it gets clear weather the company will continue to exist or will be liquidated.
The company reports 25.88 million euro losses before taxes at the end of the fiscal 2010. Sales revenue fell by over 60 million euro or 24% compared with 2009.
Due to its financial problems, debts of 50 million euros, the publisher has not paid any wages to its employees since mid-August. A preliminary accord was agreed in September between Mania Tegopoulou (the paper’s publisher and daughter of its founder, Kitsos Tegopoulos) and Alpha Bank, belonging to financier Ioannis Kostopoulos. The building containing the paper’s offices and a plan to cut its staff of 850 journalists and print workers by 50% were the price for securing the loan.
However, in October the bank withdrew the loan: according to Mania Tegopoulou, the “personal intervention” of former socialist leader Giorgio Papandreou was behind this refusal.
But Eleftherotypia was not just a thorn in Pasok’s side. It criticised the socialists’ handling of the crisis but so too that of the new coalition government under Lucas Papademos. In fact the newspaper hasn’t been particularly kind to representatives of the centre-right Nea Dimocratia party either.
Not to speak of the extreme right Laos party, up to yesterday it was accusing them of Nazi sympathies, anti-Semitic views and containing former members of Greece’s military junta.
Eleftherotypia was the first new newspaper to appear in Greece after the fall of the Colonels’ regime on July 21 1975. It soon came to be nicknamed “the paper with 80 editors in chief”. It was taken over a few months after its founding as a cooperative by publisher Tegopoulos and in November of the same year it appeared on the stands with the weekly insert Sunday Eleftherotypia, the first Sunday supplement to be issued with a Greek evening paper. It changed format in January 1983, becoming a tabloid. Since it started publication, Eleftherotypia has been an opposition voice against the governments of the then Nea Dimocratia party.
With the appearance of the Pasok government in 1981, the paper appeared to adopt a pro-government stance, but its criticisms could also be harsh at times. Many remember how it initiated the “Koskatos scandal” which eventually brought premier Andreas Papandreou in front of a special tribunal – which proceeded to absolve him. The paper’s golden years – which saw some of the best journalistic and cultural writers of the time in its columns – peaked in November 1977, when it was selling up to 160,448 copies a day. Serafim Fintanidis, who took over as editor in April 1976, has remained at the helm for thirty years – a record in Greek journalism.