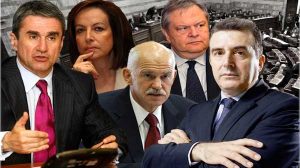 “The procedures for electing the new PASOK leader should be completed by January” stated according to sources, FM Evangelos Venizelos during Pasok’s political council on Tuesday. Venizelos proposed the preparations to begin before January 15 in order to be concluded before the signing of the new Greek loan, which will allow the party to prepare for the coming elections.
Four members of the Political Council have placed the question about PASOK’s future. In particular, the would-be challengers  for the leadership and cabinet ministers at present Michalis Chrysochoidis, Andreas Loverdos, Evangelos Venizelos and former governor of Piraeus Yiannis Mihas openly discussed the need for change and proposed  possible intra-party elections to be held as soon as possible.  So far however, the intentions of George Papandreou remain unknown, and with them – the efficiency of the Greek over-sized problematic government.
Education Minister Anna Diamantopulou also said that electing a new leader is vital for the party’s future. But while prospective candidates seem anxious to get the procedures for the party leadership rolling, current president George Papandreou remained for once again  mute about whether he intends to stand aside or seek a new term at the helm of the Socialists. Papandreou stated for once more his support and loyalty to the cabinet, but he didn’t say a word about immediate action to put an end to internal party unrest in PASOK, which prevents ministers from the party to devote to their tasks.
Earlier, many members of PASOK claimed that George Papandreou was “ready to talk” on  Tuesday’s  meeting. However, Papandreou proved them wrong-again. His silence caused the reaction of LAOS spokesman Kostis Ayvaliotis, who pointed out that it was necessary “to clarify the situation in PASOK in order to know next to whom we are in the cabinet in the coming days.”