GRNews
GreekReporter.comCanada"The Greeks of Danforth": A Journey into Canada's Hellenism

“The Greeks of Danforth”: A Journey into Canada’s Hellenism 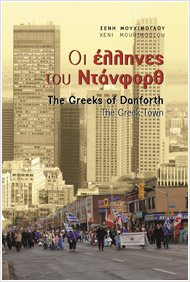 Journalist Xeni Muhimoglou has carried us for years along her journeys through the cultural pages of “N” into worlds of dreams and colours, to theatres, cinemas, dance performances, festivals, books and art. She led us down to paths and streets of knowledge and understanding

Now, her new goal is to carry her readers on a journey into the Hellenism of Canada through the pages of her brand new book “The Greeks of Danforth, the Greek Town”.

Aiming to reveal the Hellenic spirit of Canada and especially Toronto, this bilingual book is her first literature attempt and will be on the bookshelves within the next days.

The Greeks of Danforth are about the Greek migrants living in Toronto, and most particularly those living on Danforth Avenue, which has become a purely Greek part of Toronto.

Danforth Avenue is full of Greece and its colours. There’s blue and white everywhere. Stores, restaurants and coffee shops all bear Greek names, such as “Omonia”, “Acropolis”, “Kalyvia”, “Avli”, “Trapezi”, “Alexandros”, “Parthenon” or other names taken from the village of the owner, from the Greek history or tradition.

While walking along the Avenue, one can hear only Greek being spoken. The restaurants’ menus are full of Greek dishes and delicacies, such as “melitzanosalata”, “souvlaki”, “gyros”, tzatziki”.

The author aims at presenting the Greek spirit and atmosphere blooming in snow-white Canada through the narratives and adventures of the Greek people who left their home country and have lived there for 20, 30, 40, 50 or even more years.

In the meantime, after reading about the Greeks of Danforth, Greek director Vangelis Rigas visited the Greek Town and shot a short documentary film on the homonymous Avenue and the widely known “Taste Food Festival”. The documentary is expected to be screened at the International Documentary Festival of Thessaloniki.