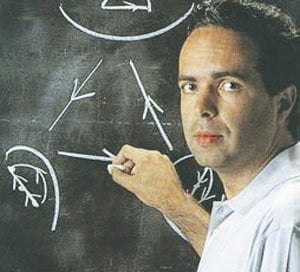 Nikos Lygeros, a Greek man with highest IQ in the world, ranked at 189 on the Stanford Binet scale, recently visited Anogia of Rethimno in Crete island.
Lygeros allowed students to ask him many questions, even concerning god and faith. Ligeros was very satisfied by the educational background of the students of Anogia.
Nikos Lygeros is a research fellow and computers and mathematics lecturer at France’s University of Lyon, as well as a member of the French branch of Mensa and several other societies for individuals with high IQs (Sigma, Mega Foundation etc.).
The Stanford Binet is used in “Genetic Studies of Genius,” the most famous longitudinal study of gifted individuals. Lygeros has also developed his own, more expansive, IQ test (the G-test) and created the PI society, where an individual’s intelligence quotient is measured in the fields of mathematics, sciences, philosophy and literature. He is the editor of PI’s online journal ‘Perfection’.
Lygeros believes Achilles, Ulysses and Prometheus are archetypes of gifted, universal genius-“the universal genius is necessarily an altruist.” A breakthrough by Lygeros and his colleagues in their research into number theory brought him into the international academic and media spotlight in 1998. A prolific essayist in mathematics, he also writes poetry, scripts, novels and essays on politics, philosophy, history, tragedy and drama. Lygeros has lived in France since he was 12.