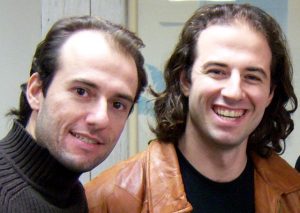 After the success of their last feature RUN IT, which went on to screen at six film festivals and picked up four awards, brothers Evangelos and George Giovanis are preparing their new movie, named Bereavement. Evangelos Giovanis spoke to us about their new movie project which includes famous Greeks in the lead roles, such as Oscar winner Olympia Dukakis, Theo Alexander and Eleni Charbila.

Tell us about the new movie you’re working on, Bereavement. How it started and a few things about the story.

Bereavement is a drama feature film about an older married man, Garvey, who starts behaving strangely as he struggles with his own mortality and the difficult decision of whether or not to reveal his new secret to his family.  Garvey will be played by Louis Zorich, and Evelyn (his wife) by Oscar Winner Olympia Dukakis.  I love them both.  They are married in real life, so it will be interesting to have them married in the film as well.  I wrote the script in 2008-2009.  My brother and I had just been rejected by the Thessaloniki International Film Festival with our last feature film submission RUN IT (which subsequently went on to screen at 6 other film festivals and pick up 4 awards).  I wrote the script in Greece.  The story came to me because I had attended a funeral of one of my father’s old friends.  Has nothing to do with that man or the funeral, but inspiration finds me like that.  It’s funny, I can make people cry simply by having them read it, but I can’t make them bring money out of their pocket to produce it.  I’ve been trying for two years and it’s not a lot of money for a feature film but its not cars blowing up and whatnot.

Is there going to be a Greek element in the movie since three of the main roles are held by the Greek actors Olympia Dukakis, Theo Alexander and Eleni Charbila?

There will be a slight Greek element.  Olympia and Louis play 2nd generation Greeks in the film, and I do make one reference about that.  Theo doesn’t play a Greek character and neither does Eleni, though they are very Greek in real life and very talented actors.  I hope we all pull it off sooner than later.

Tell us about your brother and how it is working together on projects?

My brother is my best friend and greatest ally.  We make the films together. There is nothing we haven’t done together from the cradle till now, and I hope it stays that way till we hit the dirt.  In 2006, we sold our pizza restaurant and made our last feature film RUN IT with that money in 2008.  On the good days, we had a 5 member volunteer crew.  Those guys were attending my old college, the University of Rhode Island.  I told them all to quit school for a year and just follow my brother and I around with a camera, while we make our film RUN IT.  I assured them, with that footage, they would make a blockbuster documentary.  They all regretted not listening to me.

You have also worked as an actor. Tell us a few things about it.

At first, we worked as actors out of necessity.  You see, on our film LAND OF NOD (Digital Alexander Award 2006 in Thessaloniki Film Festival) we would work in the pizza house for 6 days out of the week, and on the 7th, we would shoot our film.  Under those circumstances, it’s not hard to understand that it would take more than a year to make the film, and potential actors could hold us hostage or quit along the way. My parents even acted in it.  My accountant, my friends, my customers.  It was great.  During the second screening in Thessaloniki, a young student came up to us after watching the film.  He introduced himself and informed us that his college professor of drama and acting had told him “there is only one film you must see in Thessaloniki this year; LAND OF NOD because of the great acting.”  We’ve gotten many compliments and some criticism too.  It’s fun to act.  It’s more work than people realize too.

What is your relationship with Greece and what part of Greece are you from?

My relationship with Greece is a long one.  We’ve kissed many times.  It would take a book to tell you all the details.  Facts are almost as interesting.  We were born in the USA but we moved to Greece when my sister was 5, I was 3 and my brother was 1.  We lived in Ioannina (where my father is from) for the winter, and came to Nafplio (where my mother is from) for the summer. We still have a house in the Nafplio area and I visit whenever I can.  We moved back to the USA when I was 7.  I remember getting out of the airport.  When I didn’t see purple trees and all the other things my imagination said a new land would be, I immediately wanted to go back to Greece.  I demanded it.  It didn’t work.  My father pulled up with the car, he had gained some weight in the few months he came to set things up.  I told him so and he explained that in America you don’t walk much.  You drive everywhere.  Hey, it was a big car.  NYC was scary at the time.  Gray, too tall, too busy.  I got used to it all, and learned to love a lot of it though as time went by.  We lived in Rhode Island most of our lives, but we’ve moved all over the place – Florida, Indiana, Arizona, California.  We’re not scared of that.  We are very unique people.  I am fortunate to have both countries.  I have suffered and I have enjoyed each one.  Problem is, in America they call me the Greek, and in Greece they call me the American.  One of the best things ever about living in America?   I could talk Greek all the time and nobody knew what I was saying.  It made me so much freer than everybody else.  It affected my thoughts, my development, my character.  There is nothing I couldn’t say; I’d just say it in Greek to my brother.  Yes, I got caught once or twice, but that was great too.  Perhaps that’s why people always want to censor my scripts and money is never thrown our way to make them.   Again, there is too much to say about these things.  A good film perhaps; someday.

What do people say generally about Greece in the US and about the incidents that have happened the past few months?

It’s getting worse.  Somehow Greece has become the poster child of this movement.  The statistics prove that there are many other countries with similar economic problems and worse (Portugal, Ireland, Spain come to mind), but Greece is paying the “koutsombolio.”  I read in a news article that this year the UK budget deficit will surpass Greece’s.  I’ve also read in more than one credible source of media that the US economy is worse right now by comparison.  So why Greece?  Not sure; maybe because we were great once, or maybe because our people still know how to riot once in a while?  I can’t answer it.  However, it does give opportunity, for the people that really don’t like Greece (for whatever reason) to “trash talk.”  Personally, they don’t say anything to my brother and I because they know better.  I’m proud to be Greek, like I am proud to be American.  As a young man, I’ve put my fists up to defend my heritage…more than once and on both sides of the Atlantic.

What are your future plans?

Future plans are always what they seem, and nothing else.  Maybe it’s the eye of the storm, or maybe it’s just some dangling carrot in front of us all, but I’m not a donkey.  I do set goals, and I fight like an ancient Greek to attain them, but again, the journey is never how I planned it.