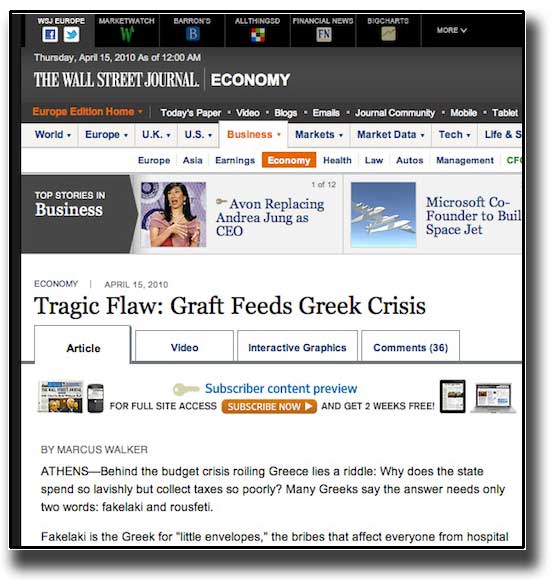 While the Greek Finance Minister Evangelos Venizelos appears to be shocked with Mr Diomidis Spinellis’ declaration that Greek tax officers, play the 4-4-2  football system  a.k.a tax evader  gets a  discount of 40 per cent on the agreed fine- tax official pockets another 40 per cent and  the state receives only the remaining 20 per cent, the Wall Street Journal hosted an article on the 4-4-2 system back in 2010, before Mr. Spinellis utters a single word!
A couple of months later, another leading global newspaper, the New York Times reproduced the Wall Street Journal piece and hosted yet another article analysing the three terms associated with Greece’s culture of bribery.
And it’s kind of ironic that journalists from the other side of the Atlantic were aware of  the Greek tax officers’ state-of the-art bribing methodologies, while the Greek Minister of Finance,  was clueless (!). Mr. Venizelos compatriots have a saying that perfectly fits his reaction “Ο κόσμος το χει τούμπανο και μεις κρυφό καμάρι” meaning that the whole world knows something but we keep hiding it.  Maybe it’s time Mr. Venizelos  starts reading American newspapers so that he gets informed about what’s happening in his own ministry.
“Shocked” Venizelos on Wednesday announced he was “determined” to minimize tax evasion and talked about his plans to accelerate criminal procedures against tax evaders and co-ordinate the activities of the police, customs and financial crime investigators in line with measures agreed with the EU and IMF but did not give a timetable.
“Tragic Flaw: Graft Feeds Greek Crisis.”
Writing for The Wall Street Journal, back in 2010 (!) Marcus Walker argued that for many in Greece the discrepancies between public expenditure and tax collection can be summed up with three words – fakelaki , rousfeti  and the 4-4-2 system:
Fakelaki is the Greek for “little envelopes,” the bribes that affect everyone from hospital patients to fishmongers. Rousfeti means expensive political favors, which pervade everything from hiring teachers to property deals with Greek Orthodox monks. Together, these traditions of corruption and cronyism have produced a state that is both bloated and malnourished, and a crisis of confidence that is shaking all of Europe.
A senior government official says some tax offices operate a “4-4-2 system,” a reference to soccer tactics. If an individual or company owes €10,000 in taxes, they slip €4,000 to the inspector, keep €4,000, and pay €2,000 to the state.
That helps explain why, in a developed country of 11 million people, only around 15,000 individuals declare an annual income of over €100,000, according to Greece’s finance minister, concludes the article.
Venizelos, Spinellis and tax evasion
The Finance Ministry suggested Spinellis stepped down recently for “personal reasons” but the paperwork submitted by the former state official appears to suggest that there was more to his resignation. Sources said the documents presented by Spinellis indicated that the Finance Ministry had failed to collect some 15 million euros in fines on fuel traders. He resigned in October as head of information systems at the finance ministry after senior tax officials failed to act on information revealed by new computer programmes that he had developed to detect tax evasion.The programmes used cross-checking of information from disparate public databases to identify companies and individuals who failed to pay a special tax on heating fuel imposed under Greece’s austerity programme.
Mr Venizelos claims to have stepped up a crackdown on tax evasion, following recent arrests of more than 50 prominent Greek businesspeople with tax debts exceeding €100,000, but -surprise-surprise- no offender has yet appeared in court.An overhaul of the tax administration, due to be approved by parliament this month, has been pushed back for the first quarter of 2012.
Greece loses revenues of €5bn-€6bn annually because of tax evasion, equivalent to 2.5 to 3 percentage points of gross domestic product – more than any other Eurozone member, according to the Paris-based Organisation for Economic Co-operation and Development.