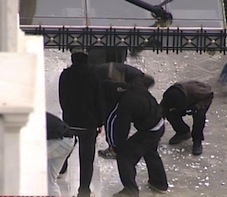 In 2008, a young schoolboy was shot and killed by police for calling one of the officers ‘pigs’. This event stirred protesters and riots in the Syndagma Square elevated for weeks and days on December of that year.
Syndagma Square has been the area were protesters go to protest against the Greek Parliament or other social problem one major one being the economic crisis and the IMF in Greece. Across from the square there sits a five star luxury hotel which goes back to 1874. The hotel has had guests such as Madonna, Maria Callas and Greta Garbo. It has also been a witness of various riots and protests in the past in Athens. The hotel had to be repaired six times this year because of rioters hacking off marbles from the hotel and throwing them at police. “The repair costs so far exceed 500,000 euros and they are not covered because our insurers are not stupid,” says Nikolaos Dandolos, managing director of the hotel’s operating company Lampse SA.
During the riots and protests that were held on Tuesday in Athens for the anniversary of the death of the schoolboy in December 2008, rioters again hacked off marbles from the hotel to throw at police. “Some of them were mere children, the leader couldn’t have been older than 16,” says Dandolos. Dandolos also mentions that “When firebombs and tear gas fall outside our staff inside work with gas masks and our guests put towels under the doors.”
For now wooden steps are in place of the marble ones but as Dandolos puts it “We do have a certain level to maintain, we’re a luxury hotel after all.”