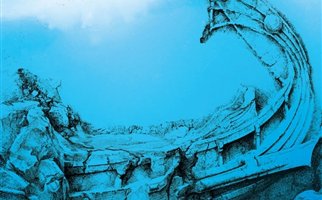 The Cycladic Art Museum of Athens, in collaboration with the Greek Ministry of Culture and Tourism, has opened a series of archaeological exhibitions dedicated to the small and remote islands of the Aegean. The exhibition, which has the suggestive title of “Agoni grammi” (literally “the sterile line”) and will be repeated every three years, is curated by the director of the museum, Professor Nikolaos Stampolidis, and by the archaeologist and museum curator, Giorgios Tassulas.
The first exhibition, which has the subtitle “Archaeological journey through the islands of Kastelorizo, Symi, Halki, Tilos and Nisyros”, is organised in collaboration with the 12th office of Classical and Prehistoric Antiques and the 4th office of Byzantine Antiques, was opened on Thursday December 8 and runs until April 23.
Some 390 artefacts from the five islands are on display in the exhibition, which opens with an overview of the geographical and geological characteristics of the island. Their mythology and history is then explained through a series of sculptures, work tools and vases that illustrate the customs and daily occupations of the antique inhabitants, but with a focus on the island’s modern problems, above all the lack of water and the difficulty of sea and air links with the Greek mainland and other islands, as told in a video by the people who live there today.
The visit begins with a marble plinth depicting a ship similar to the Winged Victory of Samothrace in the Louvre Museum in Paris. The exhibition is divided into five thematic areas, each of them a journey to one of the five islands, and starts with the room dedicated to Kasterlorizo, the island furthest away from the Greek mainland. The many finds on display here include a crown of golden ivy leaves discovered in 1913 on the plain of St.
George and now housed in the Archaeological Museum of Athens, after being offered by the inhabitants of the Dodecanese islands to the motherland in 1948. The next room, which is dedicated to the islands of Symi and Halki, features an inscription dating back to 202-201 BC, but the content of which is quite modern.
It refers to the taxation of the inhabitants, a practice that was common even in Ancient Greek times. The epigraph carved into the marble suggests a clear invitation from the island’s rulers to its citizens to make a contribution to tackle the community’s financial problems, a contribution, it is stated, that must be of at least 50 drachmas.
Meanwhile, in the room dedicated to the islands of Tilos and Nisyros, visitors can admire prehistoric objects discovered in the cave of Arcadius, which include the remains of the dwarf elephants that died out around 4,000 years ago due to volcanic activity in the area.
Speaking at the opening, the Minister for Culture and Tourism, Pavlos Geroulanos, said that the exhibition fills the visitor with “a taste for simplicity, rhythm, love for the beautiful and the real and hospitality, values that are profoundly Greek and anthropocentric”.