Today, Chicago’s new National Hellenic Museum, the first of its kind in the United States, officially opened to the public. The stunning 40,000 square foot facility was unveiled on December 8 with a special ribbon cutting ceremony. 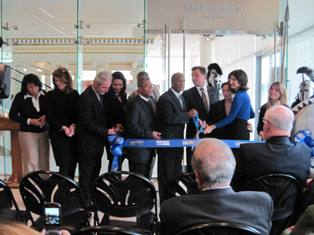 White declared that he “couldn’t miss this opportunity  to be with my Greek family on this momentous occasion.” He wished the community congratulations and said, “when people come to Greektown, they must stop at this wonderful edifice. I’ll be a regular visitor.”

“We’ve been waiting for this for a long time,” Burnett stated. “We’ve been working on this for so long. I commend you all. It took faith and heart to make this dream come to fruition.”  He added, “you believed, and you made everyone else believe.” The alderman said that the National Hellenic Museum “is not just a Greek museum, but rather a museum for the entire City of Chicago.” He said that the museum will help young people understand the history and culture of the Greeks. “We’ve received so many great things from Greece, such a rich history. The Greeks have contributed so much to the world.”

Mayor Rahm Emanuel could not attend, but sent his greetings. “Chicago is proud to be the host of the only Hellenic Museum in the US. Visitors will have a greater understanding of civilization, how the Greeks shaped the world and how we live. The National Hellenic Museum makes the city’s cultural landscape so much richer.”

“This museum can be a beacon of universal culture,” Efthymiadou remarked. “That’s how Greeks have always seen their culture. Today, we embark on a new journey, to share our culture, share the story of Western Civilization.”

Executive Director Stephanie Vlahakis invited all to “Join us, as we embark on this journey, sharing our Greek history, and the contributions of Greek-Americans.” President of the Board Aristotle Halikias thanked everyone for their support, and added, “It was a dream to build a place where our history and culture could come alive. And here it is. Welcome home!”

The Greek Goddess Gaia and Her Connection to Earth Day