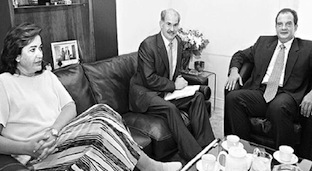 According to Reuters’ report “Curtain Falling on Greece’s Ruling Dynasts”, the end for the ruling political families in Greece is very near.
The report is explaining all the reasons why the political situation in Greece is bound to change but underlines that “nepotism and patronage are so deeply rooted, and family and clan loyalties so strong, that change will not come quickly”.
“Political culture doesn’t change overnight and Greek politics is in many ways personalistic and polarized, where the name of the family is far more important than any other credentials,” told Othon Anastasakis, director of Southeast European studies at Britain’s Oxford University to Reuters.
The current recession, however, has brought a wind of change in relative opinion polls, showing that leading PASOK and ND parties are no longer getting the former support from the Greek people as they used to.
The Karamanlis, Papandreou and Mitsotakis families have ruled Greece for almost 50 years in rotation, rendering their names the only qualification for getting at least a seat in parliament. This nepotism had turned the Greek political system into a closed profession, leaving no room for new people and new ideas.

Eleusis, One of the Most Important Religious Sites in Ancient Greece