To Fight Deficit Greek Retirement Age Must Rise To 82 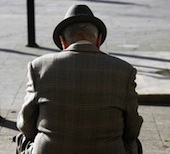 New cuts in pensions are being projected for 2012, since insurance funds are facing a tremendous deficit of 4.5 billion Euros for 2011.
Labour Minister George Koutroumanis did not hide any aspect of the dramatic situation the Greek people are about to face, while a new package of austerity measures has just been approved.
Pension funds are no longer viable. Therefore, new cuts of 15% will be imposed on pensions from the 1st of January 2012.
Scientific president of GSEE-ADEDY Dr. Savas Robolis predicted the passing of a new social insurance system for Greece in 2012.
Unemployment, recession and lack of liquidity have caused a severe blow at the funds, which are now completely unable to stand up to their responsibilities. 37% of the OAED insured (Manpower and Employment Organization) are unable to pay their annual contributions.
Greece is going through its 3rd year of recession and unemployment rates are rising at 26%, reducing funds’ incomes by 6.5 billion Euros.
Rising unemployment combined with the raising of the retirement age and the Troika demand for less social expenditures will inevitably lead to new inversions of the social insurance system.
“There will be a new bill ensuring that pensions will not exceed 2.5% of the GNP until 2060” stressed out Mr. Robolis.  “If we reduce pensions, we reduce expenditures. Yet there will be a negative ratio between contributions and provisions”.
“To make up for the Greek deficit, Greeks must retire at the age of 82” added Mr. Robolis.