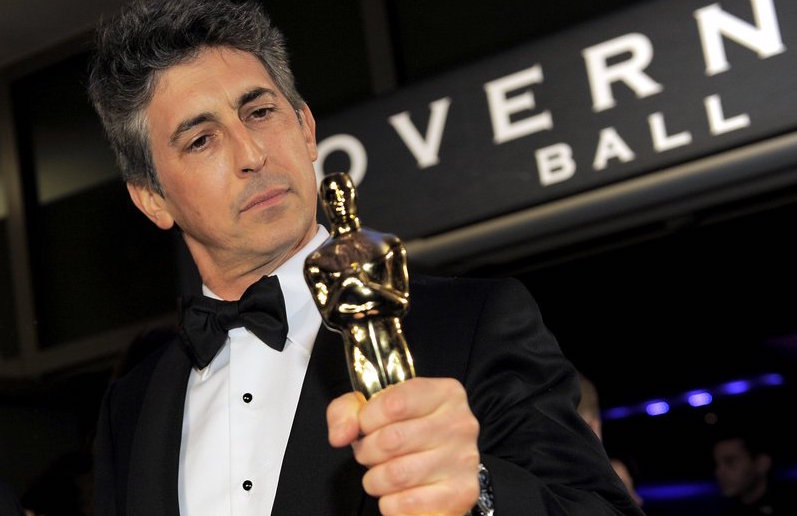 The award-winning director in an exclusive interview with Kimon Kalamaras talks about his new movie “The Descendants,” working with George Clooney, his experience at the Thessaloniki Film Festival and his 13 Greek cousins that he met in Greece!

”Bring me the Greek”, Alexander said from the other side of the line. ”Sorry, I didn’t hear you”, I mumbled .”Bring me the head of the Greek” he repeats steady and crystal clear, with a sense of humor and the ice breaks immediately. But, that is what Alexander knows very well. That is what he explores in his films. Stories of human beings trapped into their selves, into their emotions, isolated, trying to learn breaking their own ice within, to reach happiness.

At a first glance your films remind us of the magnificent Hollywood. But the themes are closer to the American Independent Cinema, I guess. Can you comment?

Well, you say two things. You say old… excuse me but did you use the word magnificent?

That’s fantastic! Thank you. But that to me doesn’t say independent, it says studio films but of the great period you know, 30’s, 40’s, 50’s, 60’s and 70’s. You see I am very influenced by the American films of the seventies. That’s when I was a teenager and going to the cinema you know two times a week and seen all those films that now we consider masterpieces. At the time they were just movies. You know these were American movies. Now we see, ”oh the seventies’ new Hollywood films, what a classic period ”. But those were precisely the films that I wanted to make and which, as American cinema changed, to get in the late seventies and the eighties, and became much more blockbuster oriented. Those films which used to be standard American films suddenly became art films, which is too bad. And then had to become independent films. So if that’s the tradition of films that you see mine in, then I thank you, and you are correct. Those are the films that I try to make.

After making a movie have you ever felt that the audience may overlook the depth of your film for the superficial and less artistic part?

Well you are asking at a way for an arrogant answer. Of course the arrogant director will say ”yes, I make comedies, I want films to be entertaining”. Even Kurosawa said first and foremost films should be entertaining. But yeah, I think comedy should not be a mask for a detraction from serious themes underneath. Now, I ‘m not going to take my films very seriously myself. Because I am always trying to improve and to learn from film to film. But yeah, I would like to think that there is a certain depth in my films, which of course I want each time and as I grow older -I am 50 now- to become more deep. Unless I am just making a fun film and there is nothing wrong with just a fun film to give people a good time.

In the film Paris je t’ aimes we saw you as Oscar Wilde and at the end as an American stunned by the beauty of Paris. How deep are you influenced by European literature and in
general by European culture?

Well, look, I am American which comes from Europe, I am Greek American which comes from Greece. In university I studied History and Literature, specifically Latin American literature. So, I always accuse myself of not having read enough, because there is so much to read and there is so much classic literature and history that I have not read. Even if the books are sitting on my selves, in front of me right now, which they are, unread you know, we all have that. But I am also, maybe in my work, very influenced more by world cinema. And you ask about ”Paris, je t’aimes”, you know, it’s a nice little short film, five or six minutes, but, and this I realized only later after making the film, it was very much influenced by David Lean’s ”Summertime”, a 1955 film where Katharine Hepburn goes to Venice. Have you seen that film?

Oh, I recommend it highly, and in fact David Lean said that was his favorite film, of his films. Yeah, I watch movies from all over the world and from every period. So movies are a big
influence on me, too.

Your films negotiate subjects such as loneliness, isolation and the conflicts of human relationships. How contemporary is this trend for existentialism and do you find fertile
ground for such an inner search, to blossom in a country like USA?

So I don’t know about a trend. I mean that’s not for me to say, that’s really I think for critics or observers, to observe trends. Because I work, I think all artists work in a vacuum. At least
consciously. Maybe their part of the collective unconsciously, because of the way the wind of culture are blowing, and how those winds blow through the artist and then blow through
collectively many artists. But being individualist are unaware of those things. I think those themes you mention are extremely universal. And of course an American audience
could respond, but those are universal themes, my God …isolation, desire for connection, desire for family. You know you see those things in films from the beginning, in literature from the beginning. I know I would like to see more such films in the United States because I don’t see enough human films coming from the United States. You know human films instead of blockbuster which are like cartoons. Which is fantastic but not at the exclusion of all other types of films. Every year we have in the United States five to ten at the most, films which are interested in a human level and which receive significant distribution. And a few films from other countries. That’s fantastic but it’s not enough for me. I want more.

Favorite directors that have influenced you?

Yeah, now of course Kimon it’s difficult for me to say that they have influenced me directly, but the directors whose work I have studied, even simply to learn principles, which then I apply in my own specific way, would be Kurosawa of course, Antonioni, Fellini to a degree, Billy Wylder of course, Anthony Man, he’s directed for example many westerns, beautiful westerns in the 50’s. Sergio Leone, I ‘ve watched his films many many times, and then many others. You know when you watch a lot of movies as I do it’s..oh and Bunuel, Bunuel is my god. So it’s not so much that their work directly influences you but it’s like you have a kind of mental spice rack. You have a mental selection of spices. It could even be one line or a dialogue, or one scene or one shot, those kinds of things.

How challenging was your collaboration with George Clooney which apart from a superstar is a director?

Oh, it wasn’t challenging at all, it was easy. He’s fantastic. He makes things very easy for the director because he has directed himself. So, those are the best actors, because they understand the directors’ problems and they know how to make things easier for the directors. I had the same experience with Jack Nicholson. He was wonderful.

The plot of the Descendants unravels in Hawaii. Are you aiming at even a greater twist of plot than that of your previous films?

Well, no, it’s not a twist of plot, I would say and it’s not so much plot but, look, when I go to make a movie there are two major considerations. One is the story. What are the emotions of the story, the feelings of the story the specifics of the story. A story which can be told anywhere. Then comes the question where. Where are we going to make this movie. In that degree I think more like a documentarian than a narrative film maker, because I want very much to show very accurately the world of the film. In this case the aristocracy of Hawaii. So that is what is going on in my mind.

Press is talking about Oscar nomination, if not an award, for the Descendants. What are your expectations?

I don’t have expectations, I have hopes, I have aspirations which is the people to like the movie. You know, if they don’t that’s ok. You know I had fun making the film. If some people enjoy watching it then I am very happy. I am happy to give them entertainment experience and maybe thinking experience. All these things about oh, box office, or Oscar, you know it’s nice but then again it has nothing to do with me. I enjoy making the film. Now, of course I enjoy to receive compliments, I enjoy the people really like the film. But in my brain there is always the thought, ”I am glad you liked the film because it helps me do more films”. My goal is the act of making films. That ia what is very enjoyable to me.

Should we expect in the future a triple Greek American collaboration between you, Phedon Papamichail and Zach Galifianakis ?Or maybe Jenifer Aniston instead of Zach?

Few days ago you were in Thessaloniki for the Film Festival. Is there something that you took back in USA after that visit, emotionally speaking?

Well there were two things emotionally. One was of course to be there during the crisis. So it was a very superficial trip. Only three days, you know. But, even three days is better, is something. At least I could walk down the street and talk to people and hear anecdotes, hear little stories about how they are thinking about the crisis and how the crisis affecting them. Which leads me to the number two thing I took away with which was that thirteen of my cousins came from Greece, from Aigio, they came in Thessaloniki. It was beautiful, so yeah, they came to see the movie on Friday night and then Saturday afternoon we had a very long lunch at a taverna in Thessaloniki and it was very beautiful for me. I was so touched that they came to see me and support me and have that time with me. And of course when we looked into each others eyes, there’s the understanding not just of the culture but of the family. And it’s beautiful when you see the DNA transcend time and culture. Very beautiful and I loved it very much.

You came in the worst week for Greece. There was no government etc.

Yes, but how beautiful that I came on the worst week. You know it’s funny how I have a very different life as an American than I would have as a Greek. I am not saying better or worst. I ‘m just saying different. But it’s interesting how in times of crisis my DNA is activated. It makes me feel very Greek and very connected and interested, very interested.