GRNews
GreekReporter.comGreeceGreek Crisis-hit Donkeys Immigrate to the UK For a Better Life 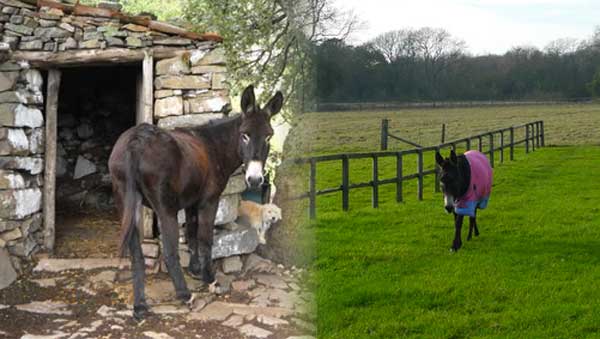 LITTLEHAMPTON, England— Like thousands of his compatriots, Christoforos, was forced to immigrate and move to the UK for a better future. Christoforos isn’t one of the thousands Greek doctors or engineers that left Greece in order to find a job. He’s a lucky young stud with a shock of brown hair who goes by just one name. Instead of being thrown out on the street last year—or worse—Christoforos escaped his humble digs on the island of Kos in an unlikely Odyssey that ended in the special wing of an aristocratic U.K. estate dubbed “The Donkey Palace.”
Brits give bailout to Greek pensioner donkeys (but not to Greek pensioners)
U.K. Prime Minister David Cameron has repeatedly rejected bailout help for Greece. But that hasn’t stopped British citizens from organizing the rescue of Greek donkeys abandoned by  crisis-hit owners who can’t afford to feed them any more.
Wall Street Journal hosts the story of Christoforos, who last December, along with a companion, a white-nosed donkey named Fotis, made a five-day journey to the south of England on a special equine transport truck. Today, they live on an 11,000-acre estate called Angmering Park, owned by Anne Herries, the daughter of a late Duke of Norfolk.
The two donkeys wander green rolling fields during the day and dine on fresh hay and ginger snaps. They enjoy frequent tooth and hoof cleaning. At night, they sleep in a heated stable with a view of the English Channel.
Greek pensioner donkeys enjoy luxurious retirement
Unlike Greek pensioners who literally suffer from Merkozy’s financial junta and are unable to pay for basic utilities such as food and heating, these animals enjoy a luxurious retirement abroad which many Greek pensioners would envy.
“They must think they’ve landed in some sort of donkey heaven,” said Gwen Ware, a British citizen who helped raise funds for their emigration through her charity, Saving Greek Animals.
At Lady Herries’s estate, Christoforos and Fotis live with seven other donkeys saved from starvation or the slaughterhouse. There is room for about 40. But caretaker Fiona Burness said she feared crowding would cause the donkeys to “lose out on the socialization and the individual attention.”
On the other hand, Greek pensioners are bound to lose out their socialization as the painful property tax hike, the deep pension cuts, and the new Medicare fees they have to pay as off yesterday don’t leave enough cash even for enjoying a traditional Greek frappe with their friends.
Hard workers
Donkeys have always been considered as hard workers in Greece. In fact there is even a metaphor relating to donkeys and hard work (δουλεύει σαν το γαιδούρι) and they still carry food and firewood. Some haul tourists up steep steps in such vacations spots as Santorini and Rhodes.
Animal-rights groups say the animals are now being abandoned at a growing pace by Greek owners who can’t afford them. The market for work donkeys has plummeted along with demand for Greek debt.
Donkeys “have no one to champion them,” said Ms. Burness, Lady Herries’s secretary, who helps care for the animals. At the sprawling English estate, she said, they have “deep straw beds, fresh water all the time, vets that come and see them at any time of night or day.”
The British, known for a sometimes eccentric love of animals, have a special affection for donkeys. Riding donkeys on the beach in coastal resorts like Blackpool and Brighton was once a highlight of British vacations.
Others say Britons identify with the beasts’ stoicism. “Snaffi, one of our donkeys, got his head stuck in a gate. He was just standing there quietly for 40 minutes, waiting for someone to come help him,” said Ms. Burness. “A horse would have been going berserk.”
Greek donkeys (also) suffer from the crisis
It’s unclear how many Greek donkeys are forsaken in the country’s economic drama. A spokeswoman at Greece’s agricultural ministry said the government had no information on the matter.
Barbara Doulyeraki, who runs Agia Marina Donkey Rescue in Crete, said she gets about two or three calls a week from villagers selling or giving away donkeys, up from about one call a month in years past.
She said older donkeys who can’t work are sometimes left on roadsides to starve or are sold to roving meat vendors.
“It’s quite a tragic situation,” said Ms. Doulyeraki. “These donkeys have worked for 25 or 30 years, really hard.”
The Donkey Sanctuary, based in England’s southwest region of Devon, funds a Greek rescue facility that costs €45,000 a year, or about $60,000.
Another U.K.-based charity, Greek Animal Rescue, raises about €150,000 per year, with a portion earmarked for a donkey sanctuary on the island of Kos.
The group’s founder, Vesna Jones, helped relocate Christoforos. “They’re lucky,” she said, “those that make it out.”
Watch the video:

Greek donkey immigrants
Immigration for donkeys is easy and fast. It requires only a horse passport—also good for donkeys and zebras—that lists age, medications and, sometimes, a silhouette for identification.
“It’s free movement across borders for donkeys,” said a spokesman for the U.K.’s Department of Environment, Food and Rural Affairs. The department doesn’t track the number of donkey entries.
On a recent day, Christoforos and Fotis brayed and gently butted visitors to their estate. The animals ate scrub brush for years in Greece but now they turn up their nose at anything but premium racehorse hay.
Some rescued donkeys work a bit to break up the day. At the Donkey Sanctuary in Devon, donkeys give rides to emotionally-troubled children as therapy. Others make house calls to comfort the elderly.
“A young healthy donkey isn’t going to like standing around in field all day,” said Suzi Cretney, a senior public relations officer for the sanctuary.
Aliki, now called Alice by her English caretakers at Lady Herries’s estate, will work onstage soon. She’s cast to carry Mary in the local Nativity pla
According to the Labour Agency, the number of Greeks registered with Germany’s social security system increased 5.9 per cent between the end of March 2010 and this year.
(With information from Wall Street Journal)