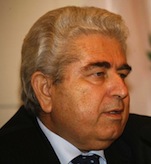 President of the Republic Demetris Christofias has said that the differences between the two sides in the chapter of external relations are more than evident, noting that it is because of this reason that discussions on the matter continue.
Speaking to the press after a meeting he had with the Turkish Cypriot leader Dervis Eroglu in the framework of UN-led direct talks to solve the Cyprus problem, the President said the leader’s aides, George Iakovou and Kudret Ozersay will have a meeting in order to focus more on the matter.
Replying to a question whether the Turkish Cypriot side wants the two federal constituent states to be able to sign separate agreements with third countries, President said that “there is the possibility for direct agreements in relevant matters, such as trade and culture issues, however this must happen in cooperation with the Central Government and our differences focus on that”.
He also said that during today’s meeting, the two leaders had an exchange of views on the property issue.
“The UN will continue their shuttle diplomacy in order to have some results before the meeting end of January, between the UNSG and the leaders of the two communities”, President said.
President Christofias said that during today’s meeting, the Greek Cypriot side brought up the issue of the census conducted in the occupied areas on Sunday, underlined that the issue should be discussed according to the international principles.
“We cannot agree with the position of the Turkish Cypriot side that any data put on the table by either side regarding the citizenship issue will be accepted”, he noted.
He also said that during the next meeting between the leaders to take place on Monday, the Greek Cypriot side will ask UNSG Special Adviser Alexander Downer for clarifications whether UN observers have visited the occupied areas for the census.
(source: cna)