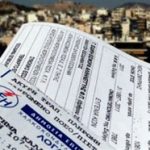 ATHENS – The Greek Finance Ministry has issued new guidelines stating that the most vulnerable groups in society will not have their power turned off if they can’t afford to pay a property tax surcharge that is being put in electric bills in a bid to raise $2 billion to help raise revenues for the cash-starved country. Finance Minister Evangelos Venizelos, who imposed the tax, along with others on the poor, confirmed the change of heart after he earlier said everyone had to pay the bill or have their power cut off, wages garnished or property seized if they didn’t.
Now, he said, there were be exceptions, including those who are more than 80 percent disabled and will be taxed at a lower rate, and that there will be no cutoffs for those with serious health problems, nor those who have no form of income or asset except their property and who would have been tossed onto the streets if they didn’t pay, joining hundreds of thousands of homeless in Greece, which now has the highest rate of homelessness in Europe. Leaders of the labor union which oversees utility workers said they had ordered them not to turn off the power if people couldn’t pay.
Interim Prime Minister Lucas Papademos, who his heading a temporary coalition government, told Parliament the tax is essential and will not be revoked, but admitted there were wild overcharges and that the government should not have gone after those who can’t pay. Papademos said the levy could not be revoked if the government is to meet its deficit reduction targets but noted that special terms would apply for large families on low incomes, the disabled and the long-term unemployed. “The revised law aims to correct mistakes and ensure social justice,” the premier said.
Venizelos stressed that, “There will be no power cuts to those who are genuinely unable to pay the tax,” but added that those who have the means to pay the levy but simply refuse to do so “will not be permitted to shirk their responsibilities within the broader national effort.” The tax hikes are being demanded by international lenders as a condition of getting $152 billion in rescue loans to keep the country from going bankrupt. The Finance Ministry also plans to set up committees including one tax official, one social worker and one police officer – who will check which cases fulfill the terms for exemptions.
The guidelines also determined what property-owners should do in the event of receiving excessively large levies, which have been calculated on the basis of erroneous data about the size and location of their homes. Applications for corrections to property tax bills should be submitted to the corresponding municipal authorities by January 20. Any difference will be deducted from next year’s property tax bill as Papademos said the second property tax bill will be charged again next year amid speculation it will become permanent. Venizelos also is charging people two income taxes a year.
The Council of State, the country’s highest administrative court, was to consider the legality of the government’s decision to impose the tax via electricity bills after European Union officials said it could be unlawful and some Greek law experts said it is unconstitutional. The court is considering the matter following countless appeals against the tax and is expected to issue a verdict within the next two months.