Unions Take to the Streets in General Strike‎ 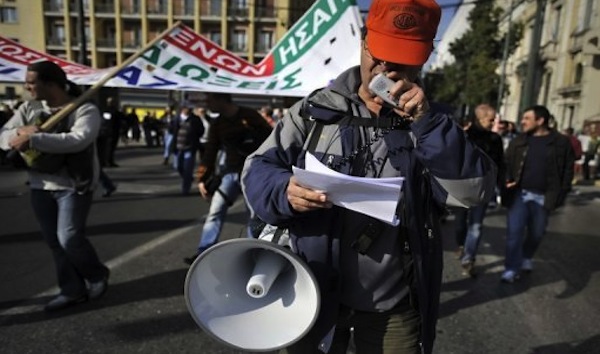 Emergency staff ran hospitals, schools closed and thousands of austerity-weary Greeks took to the streets on Thursday in a 24-hour general strike that tested the resolve of a national unity government.
Greek unions took to the streets Thursday to force the new government to change tack on its austerity polices as Prime Minister Lucas Papademos insisted he would press ahead with more spending cuts.
Chanting “Get out, take the budget and get out of here!,” Greeks poured into the square in front of parliament to protest about a new dose of austerity medicine prescribed by foreign lenders as the price for bailout loans.
Kostas Tsikrikas, head of the ADEDY civil servants union, said “workers continue their struggle against this unfair, barbarous policy … We are going to coordinate our action with unions in other southern (eurozone) countries.”
Tsikrikas conceded there were fewer protestors than at the last general strike October 19 which attracted around 120,000 but added that “the problems are going to get worse, we have had enough and we can’t go on like this.”
Police put the demonstrators at 17,000 in Athens and 6,000 in the northern city of Thessaloniki as the sixth general strike this year shut down public services and crippled train and ferry services.
(source: AFP, Reuters)