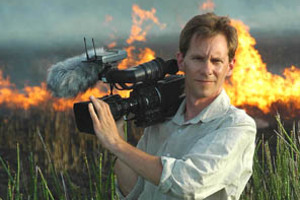 Greek-Canadian George Kourounis is an adventurer, a TV presenter, a storm chaser and explorer, a photographer and a writer. He has travelled all over the world chasing after extreme weather phenomena, such as tornadoes, floods, giant hails, dust storms, hurricanes, avalanches, volcanoes and lightning among other things.

“Long time ago I’ve decided that my purpose in life is to record the most peculiar places on earth and the most extreme natural disasters and phenomena and then to share this knowledge with the rest of the world” told Mr. Kourounis to ANA-MPA, adding that he does not know what he’ll be doing in a week’s time and that is the most exciting aspect of his work.

“There are many things I like to do but what matters the most to me is exploring the angry mother-nature”.

George Kourounis was born to a Greek father (from Kos) and a Canadian mother in Toronto. His heroes when he was young were Indiana Jones and Jean-Jacques Cousteau, while sciences and the environment had always been his favorite topics of study.

He began working as a mechanical engineer creating an audio studio, while his free time was split between travelling and shooting pictures.

“It all began as a hobby. During vacations I started shooting lightnings and then all of a sudden I started chasing storms in one of my trips. There I Met people who knew how to do this. Year after year I followed my new passion and began recording fires, hurricanes and volcanoes with my own expenses” said Mr. Kourounis.

Soon Kourounis made a name of himself as being the man who was always there when a natural disaster hit. A TV producer in Toronto advised him to turn his passion into a TV show because of its uniqueness. The result was a documentary series called “Angry Planet”, which was screened from 2006 until 2010 in more than 100 countries around the world.

After getting involved in the documentary series, Kourounis decided leaving his engineer job and become a full time explorer. “This decision was the best decision of my life” he comments, pointing out that carrier has never meant much to his but rather resulted from doing something that he loves.

“The most important thing is to make up your mind on what you like to do. If it is something you love, then you’ll excel in it. There is no other way”.