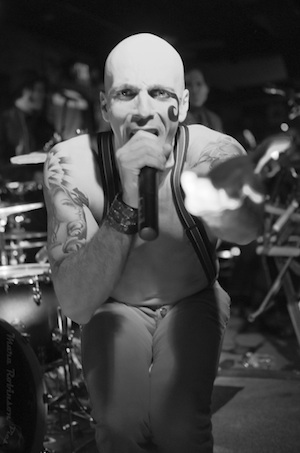 LIVAN (pronounced Lie’van), the Greek-born, London-bred Goth singer, has been asked by the legendary Alice Cooper to continue rocking as his opening act for the second leg of Cooper’s “No More Mr. Nice Guy” tour.  LIVAN rejoined Cooper on November 27th in Huntington, WV, continuing through December 14th in Orlando, FL. About his opening performances, The Times Tribune (PA) has already declared, “(LIVAN’s) London-based quintet delivered a hard-rocking set of hits including “King of the World,” “Undead” and “Black Cherry” and even threw in a cover of the Velvet Underground’s “Venus in Furs.”

Along with the Cooper tour, LIVAN is set to perform six solo dates, starting on November 25th at the Prophet Bar in Dallas, with shows in New York, Pittsburgh, Akron, Columbus and Jacksonville to follow. Following his previous U.S. tour, the Cleveland Free Press said LIVAN, “grabbed the crowd by their combat boots and delivered…”

LIVAN is an engaging study in contradictions—he has a Masters degree in Psychology; loves a myriad of musical artists from the Clash to Bauhaus, and cites Lord Byron as his favorite wordsmith. Off the Grid, LIVAN’s third full-length release, is 11 tracks of dark, yet manically energetic post-punk rock. Captivating songs like “Little White Lies” and the wickedly propulsive “Undead,” make Off the Grid, produced by LIVAN, at once raw, primal and polished, hearkening back to the darker-edged British bands of the mid- 70s to mid-90s.

Off the Grid is LIVAN’s 4th release in three years, and the prolific writer and performer (who composes on bass, guitar and piano) has grown exponentially with each offering.  2008’s political and fraught Democricy led to 2009’s Happy Returns, which American radio embraced with the title track hitting #8 on the FMQB radio charts.  Now, from Off The Grid, the track “Undead” has also landed at # 8 on the FMQB radio chart, bringing LIVAN’s unique musical style to an even larger audience. This latest post-punk rock offering was produced by LIVAN and all songs were mixed by 2x Grammy Award winner Adrian Bushby (Foo Fighters, Muse), except for the track “Meet Me On The Other Side” mixed by Nat Chan.

LIVAN On Tour With Alice Cooper: