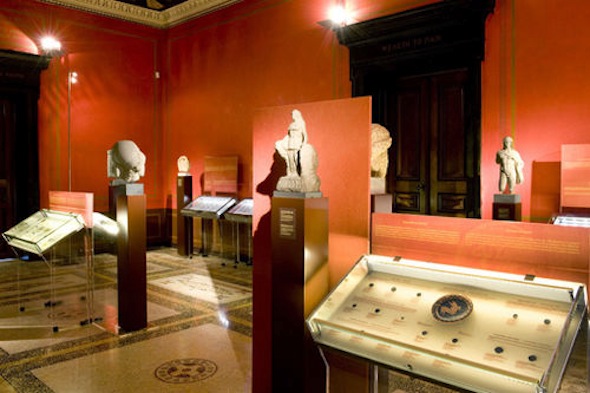 A genuine treasure of Ancient Greece concerning one of the most important ancient city-states of the northern Aegean, Abdera, is currently on display at the Numismatic Museum in Athens.
The exhibition, which will run through March 4 2012, is dedicated to the donation of the ancient Abdera treasure, which was discovered in 2000 in London and ending up at the Athens Numismatic Museum after several stops, thus explaining the exhibition’s title “Abdera-London-New York-Athens”
The treasure dates back to 520-500 BC and was discovered at the London market in 2000 by an American collector. The collector succeeded in purchasing all 22 coins, thus maintaining their unity, and subsequently donated the collection to the Numismatic Museum in 2010.
A total of 57 coins are presented in the exhibition, which also includes another 38 coins from Abdera found in the Museum’s various collections, in order to present a rounded picture of coinage in Abdera from the 6th century BC up to the 2nd century AD.
Abdera was founded in the 6th century BC on the coast of Thrace by the Ionian city of Teos and became a powerful city. The city’s history was formed through its relations with the Persians, the city-state of Athens, the Macedonian kings and Rome. The first coins are dated back to 520-515 BC, with the dominant image being the griffon, a mythical creature with the body of lion, the head and wings of an eagle and the tail of a snake. This is related with the metropolis Teos as well as the ancient Greek gods Dionyssos and Apollo, who were worshipped in Abdera.
(source: ana-mpa)

Konstantinos Polychronopoulos, founder of charity "The Other Human," works tirelessly feeding the hungry in Greece in the wake of disasters.
Greece