Report: Troika Backs Down to Samaras, No Signatures Needed 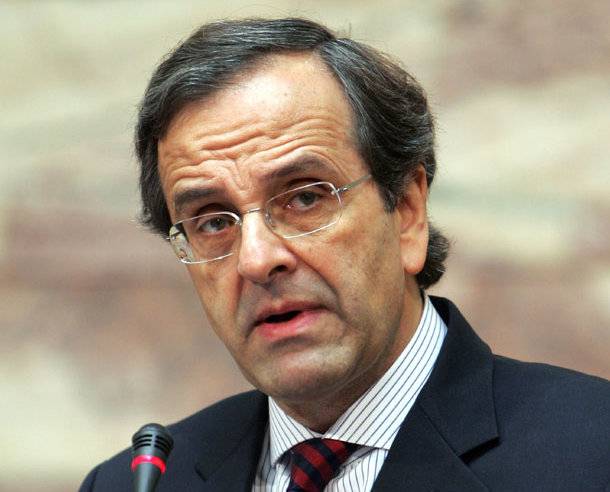 ATHENS – Reversing itself after insisting that leaders of Greece’s new coalition government would have to sign a deal to keep rescue loans coming, international lenders now have reportedly said that won’t be needed, an apparent concession to New Democracy head Antonis Samaras who steadfastly refused to make a written commitment, arguing that his word was good enough. The newspaper Kathimerini reported on Nov. 19 that the Troika’s change of heart came after its officials met with Greek representatives in Athens.
The newspaper said that reports from the office of the Deputy Prime Minister and Finance Minister Evangelos Venizelos as well as from the International Monetary Fund headquarter in the US suggested that Greece’s creditors will not insist on written guarantees after all, according only to an unnamed source. That was at odds with other media reports that said there had been no decision, although Samaras was sticking to his guns and saying his word should be trusted. He earlier dropped his opposition to bailout deals but said he was still against the austerity measures attached to them, a contradictory position that Troika officials said compromised chances of getting more money.
“Regarding the discussion we had with the troika and specifically on the written reassurances, I repeated to them my position on the issue,” Samaras told reporters after the talks. Critics said his stance had jeopardized Greece’s deal and could lead to workers and pensioners not being paid. He said he’d proved his support for the bailout by backing the coalition led by Papademos. The Troika also wanted signatures from former prime minister George Papandreou, interim Prime Minister Lucas Papademos, and George Karatzaferis, leader of the far Right Wing LAOS party that is also represented in the coalition.
The Troika met with Papandreou first, with the IMF representative Poul Thomsen answering “no comment” to journalists’ questions about the meeting. Sources close to Papandreou expressed their worries about the supply of guarantees by the other parties, the newspaper said. The three parties are heading a shaky coalition led by Pademos, a former European Central Bank Vice-President charged with keeping the loans coming, including a pending $11 billion installment from a first bailout of $152 billion, without which Greece won’t be able to pay its workers and pensioners, and a proposed second bailout of $175 billion that is on hold until the Parliament approves more pay cuts, tax hikes, slashed pensions and layoffs of thousands of workers to keep Greece from defaulting.
Samaras and Karatzaferis said that a written guarantee, on top of the verbal agreement reached with the EU-IMF-ECB in October would insult them and Greece’s national dignity, although French President Nicolas Sarkozy and German Chancellor Angela Merkel said Portuguese leaders had done so in return for a bailout and insisted Greece would do the same before they relented as well and actual support to the October 27 agreement through participation in the new coalition government of Lucas Papademos, would compromise national dignity.
Troika officials were said to be reluctant to give Greece more loans without a signature, fearing that the political leaders would not keep their word as elections loom in February and Samaras tries to position himself to take power back for New Democracy, whose Adminsitration under former Premier Costas Karamanlis fell in 2009, shortly before it was revealed the government had lied about the country’s economic situations, precipitating a crisis when Papandreou took power.