GRNews
GreekReporter.comGreek NewsEconomyNov. 17: Get Ready for a Different Kind of Uprising

Nov. 17: Get Ready for a Different Kind of Uprising 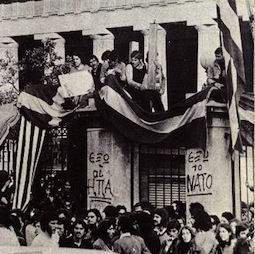 ATHENS –  On Friday night, Nov. 16, 1973, police started facing off against protesters inside and outside the Athens Polytechnic University as tensions ran high during the still-reigning military junta of the repressive Colonels imprisoning Greeks in their thoughts. Diomedes Komnenos, 16, was inside the university grounds, a high school student caught up in the fever of protest and prospect of bringing down a dictatorship and restoring freedom to a country which had frequently been invaded and conquered but always rose again. It would this time too, but it would cost Komnenos his life, making him a martyr now virtually forgotten as Greeks, caught up in an economic crisis threatening their own survival, this year will mark the anniversary of the Nov. 17 fall of the junta with thoughts for their own future, not of the past and the people who died to give them one.
Before that next fateful day that would help bring to an end a seven-year storm of oppression, Komnenos and many other high school students barricaded themselves, awaiting a police attack. This year, some 7,000 police will be mobilized in Athens as demonstrators, including the inevitable hooded anarchists who frequently infiltrate protests for a chance to throw Molotov Cocktails and run, will use the university as the stepping-off point for both a celebration and a protest. Nov. 17 is an important day for Greeks, those who remember its meaning and those who bastardized it, such as the terrorist group which took the date as its name and then unleashed its own reign of crime from 1975-2002 before its leaders were caught, long after its ideas were repudiated by most Greeks who remembered what bullets and bombs brought them.
About 10 p.m. on that night 38 years ago, police began firing smoke bombs to force protesters to disperse at the university. Komnenos and other students were on a street corner across from the university and were reportedly hit with sniper fire from the roofs of neighboring buildings. He was killed, and soon became one of the heroic symbols of resistance to real tyranny in a revolt led by students that toppled the dictatorship on Nov. 25, although an interim government would last only until July of 1974 when Cyprus was invaded by Turkey.
Nov. 17 is the date Greeks remember and mark, although this year will have a different tenor, joy replaced by worry and fear for the future, overshadowing what happened on that day in 1974 when the rebellion against the junta and American support for it ended in bloodshed as tanks crashed through the gates of the Polytechnic, putting a lie to the Administration and captured in indelible images that went around the world, showing the shame of the dictators who ruled the country which created democracy.
This year’s anniversary demonstrations could be the most volatile in years as Greeks say they are willing to give a brief honeymoon to interim Prime Minister Lucas Papademos, who took over after PASOK leader George Papandreou resigned in the face of ceaseless protests, but will still use the date to show their anger and contempt.  “We expect massive participation as rage and anger has been dwelling in people for so long,” Mary Bossis, International Security Professor at the University of Piraeus told Reuters. “It is very possible that some groups will misbehave.” Greek leaders and those of the European Union-International Monetary Fund-European Central Bank Troika lending Greece $152 billion to stay afloat, and offering a second bailout of $157 billion, will be watching intently to see how Greeks react on a day symbolizing resistance. “The message on November 17 will be that Greeks can’t take it anymore,” said Nikos Kioutsoukis, General Secretary of the private sector union GSEE. “People will take to the streets again when they dip into their pockets and feel that they are empty.” His counterpart at the public sector union ADEDY Ilias Iliopoulos said the march “will be a warning” to the government on a day when it would be compelled to listen. “If they continue with austerity, we’ll step up protests.” 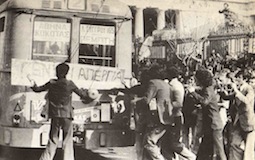 Now, Greeks are a laughingstock, derided as the lazy lot who threaten to bankrupt their own country and bring down the Eurozone of the 17 countries using the euro as a currency, parodied on TV shows in Britain where the “Go Greek for a Week” show mocks them in a world which forgets Greece saved the Western Civilization it created and stood almost alone fighting Nazis, Greeks resisting with their teeth when their weapons were taken away.
Gone is the dictatorship that spirited away Leftists and poets and intellectuals and people with an original thought, taken to prisons and islands and tortured and exiled for their political beliefs. Its leader was George Papadopoulos, and his rule tried to control every aspect of life, banning student elections in universities, persecuting innocent students who might wear a simple piece of jewelry on the left side of their clothing, abolished civil rights, dissolved political parties and took political prisoners. Papadopoulos was a Nazi collaborator during WWII and trained by the CIA and it was said he was the first recruit of the American intelligence agency to lead a country, and the rabid U.S. backing for him and his methods, including torture, created bitterness and resentment that lasts to this day.
Christine Ralli, 55, was a 17-year-old high school student in Athens at the time and said she remembers getting a call from her friend telling her to listen to broadcasts from the Polytechnic rousing people against the junta. “Here is Polytechneion! People of Greece, the Polytechneion is the flag bearer of our struggle and your struggle, our common struggle against the dictatorship and for democracy!” said the broadcasts, especially the impassioned plea of one noted student, Maria Damanaki, who later became a politician aligned with the ideas of stifling dissent,  a freedom for which she fought when she was young.
Still, Ralli remembers the vibrancy then. “It felt like something grand was happening,” she said. “Ideas were erupting.” At their school, the students that morning sang the national anthem as required, a rote event, but then briskly sang it again a second time, as she said they finally felt what it meant and that the dictators might fall. She remembered it was even forbidden to listen to music by the likes of noted composer Mikis Theodorakis, who was imprisoned and tortured for his Leftist ideals.
It had been seven years of hell for the Greeks, but, livened by the courage of students, the workers took to the streets too and it wasn’t long before the Colonels were on the run as they had underestimated the resistance and power of the country’s youth. Another galvanizing act was the suicide in Italy of Greek student Kostas Georgakis, who killed himself as an act of protest against his government in 1970. On Feb. 21, 1973, law school students went on strike and barricaded themselves inside their school building and demanded repeal of a law that forcibly drafted them into military service, a de facto support of the military they despised. The police, as they did on June 15 this year when they charged into a crowd of demonstrators angry over austerity measures, reacted with brutality.
And so, on Nov. 17, 1973, in the early morning hours, the transitional government panicked and sent in the tanks, one of which crashed the gate of the Polytechnic about 3 a.m., a grainy film taken by a Dutch journalist showing it bringing down the main steel entrance to which people were clinging. A student broadcasting from the site called on the soldiers not to carry out their orders against the people, his voice emotional, reciting the national anthem before the tank entered the yard and the transmission stopped. The government said no students were killed but reports claimed 24 died outside the campus, including Komnenos and Alexandros Spartidis. A week later, one of Papadopoulos’ co-conspirators in the junta, Dimitrios Ioannides, staged a counter-coup that overthrew him and military law was reinstated, but on July 15, 1974, Ioannides’ attempt at a coup in Cyprus led to the Turkish invasion and his short regime ended too, leading to Constantine Karamanlis returning from self-exile in France to be appointed Prime Minister and the first free elections in a decade were held.
Papadopoulos and his co-conspirators were tried for high treason, mutiny, torture and other crimes and in 1975 he and several others were found guilty and sentenced to death, which was later commuted to life imprisonment. He stayed in prison, rejecting offers of amnesty if he would denounce what he did, refusing to do so. He died in 1999 of cancer, in a hospital where he had been treated for three years, but remains both a hated figure and symbol of authoritarianism, and a hero to extremist groups even now for being a strongman anti-Communist. Some of those supporters joined the Popular Orthodox Rally LAOS party, which is part of the coalition government temporarily ruling Greece. The irony is not lost today as Greece has an interim government and awaits elections in February, even as some Greeks complain they are living under an economic dictatorship and all that’s missing is a tank in the street going after students.