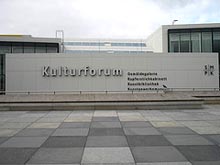 Everyone interested in music left the Kulturforum in Wiesbaden, Germany in absolute joy after the musical night had come to an end.

On October’s last Saturday, Greeks gathered in the culture centre of Wiesbaden and enjoyed the performances of five excellent musicians. With kLANGdIVERS opening up the concert, Greek songs filled up the hall and made everyone sing along to the popular and beloved melodies.

Traditional music played from the Aegean and the Greek mainland composed by Dionysios Visbardis, Nikos Charizanos, Yiannis Konstantinidis to important Greek lyric poems orchestrated by famous composers and conductors Manos Hatzidakis and MIkis Theodorakis. It was an expression of Greek music that Germany is not really used to.

The interracial audience applauded warmly the pianists Despina Apostolou and Jeferson Samsonowski, the soprano Nastazia Dokalou, the cellist Barbara Graf and the violinist Konstantina Pappa for their excellent and touching performance.

The event was titled “A Suitcase Full of Sounds – Songs from Greece” and was dedicated to Greek migrants travelling to Wiesbaden 50 years ago in search of a job.

President of the Greek Community of Wiesbade Mr. Theodoros Psyrakis told the attendees that the Greeks have earned a lot from their host country but have also contributed severely to the rebuilding of the German state after the end of World War II.

The event was co- organized by POLYTROPON-V.CHATZIVASIOS Co., the Greek Community of Wiesbaden and the Greek-German Wiesbaden/Mainz Cooperation.