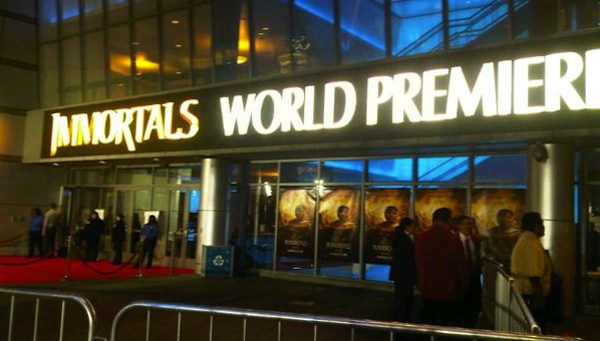 The long awaited “Immortals” movie, written by Greek-American brothers Vlass and Charles Parlapanides is finally here. The film’s star-studded world premiere and red carpet took place at the Nokia Theater in Downtown Los Angeles on Monday November 7th. The movie is a result of the collaboration of the producers of “300″ with “Greek Gods” of screenwriting, Vlas and Charlie Parlapanides. “Immortals” may be the biggest Greek mythology-themed blockbuster of the year and is set for release on November 11th.

Eons after the Gods won their mythic struggle against the Titans, a new evil threatens the land. Mad with power, King Hyperion (Mickey Rourke) has declared war against humanity. Only he who possesses this bow can unleash the Titans, who have been imprisoned deep within the walls of Mount Tartaros since the dawn of time and thirst for revenge…until a peasant named Theseus (Henry Cavill) comes forth as their only hope.excellent cast and crew to shoot the most expected movie with a mythological subject of the year, the Immortals.

The breathtaking village of Theodoriana, nestled in the Tzoumerka mountain range in Greece, looks like something out of a fairy tale.
Art