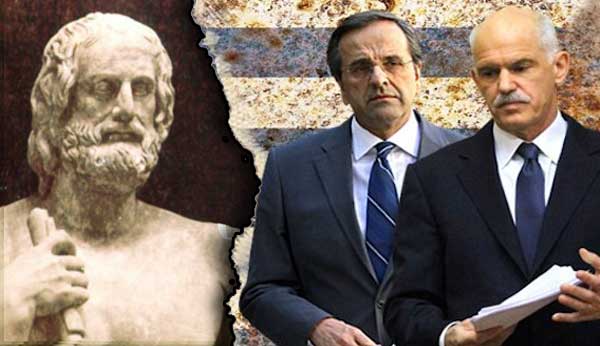 The machinations between Prime Minister George Papandreou, a Socialist whose two years in office was marked by a decline and fall from being viewed as decent and humane to a soft-spoken failure unable to convince Greeks that cutting their pay, raising their taxes, slashing their pensions and firing scores of thousands of them was necessary to save the country from economic collapse, and Antonis Samaras, head of the major opposition Conservative New Democracy party, as they wrangled over how a new coalition government would be set up, was worthy of Euripides, who knew something about tragedy. Make that Aristophanes, because while Papandreou and Samaras bickered like fourth graders in a schoolyard, it became a comedy – of errors.
By the time Papandreou finally agreed to relent and step down to let a disunity coalition take over, one still dominated by his PASOK party that dismantled Socialist programs, and New Democracy, Greeks were weary of the internecine warfare between politicians who danced a selfish pas de deux, ignorant of the high anxiety they were causing people wondering if Greece would get kicked out of the Eurozone and lose the lifeline of international aid that is keeping the country from going bankrupt and allowing workers and pensioners to get paid, albeit less than they were getting. The two leaders were arguing over power while Greeks were both worried and disgusted at what became a soap opera.
A phony photo opportunity of the two of them sitting opposite each other before President Karolos Papoulias – Papandreou with a benign look of resignation on his face, and Samaras with the kind of smug countenance of arrogance that made you want to smack him just on principle – was a picture perfect example of all that has gone wrong in Greece, not just the last two years, but the last 30, since Papandreou’s father, then Prime Minister Andreas Papandreou, began hiring everyone and their cousins to get votes and stay in power at any cost. Now the real cost has become known: bankruptcy, and it allowed Greece to cede its sovereignty to, of all people, the Germans, as Chancellor Angela Merkel has been the real Prime Minister of Greece, setting the terms for Greece to get the kind of loans that showed beggars can’t be choosers.
The Bible has it right: “The rich rules over the poor and the borrower becomes the lender’s slave,” and it was apparent as Papandreou, through the Troika of the European Union-International Monetary Fund-European Central Bank, which is lending Greece $157 billion to stay afloat, and the promise of a second bailout of $180 billion, did what he was told. The directives came from the Troika, but it was Merkel pulling the strings because her country was putting up much of the money loaned to Greeks. She forgot that the Nazis looted Greece of gold and treasures and everything that wasn’t nailed down and still owes war reparations for massacres and nearly destroying an ancient country that one of Germany’s real Hellenophiles, archaeologist Heinrich Schliemann, revered.
Even as he was leaving office like an actor who couldn’t remember his lines, Papandreou made sure to keep calling Merkel to inform her just what was going on as Greece tried to form a government without him. It wasn’t all his fault, although if he’d just started arresting major tax evaders he might have succeeded in resurrecting himself, but Papandreou felt obliged to serve the interests of Merkel and French President Nicolas Sarkozy and the French and German banks who own the note on Greece.
Even a 50 percent reduction in Greece’s debt they agreed on when Papandreou came to them hat-in-hand couldn’t save Greece, so he tried a clever tack: proposing a referendum to let Greeks decide if, essentially, they wanted to die or be killed, to approve the bailout and austerity measures that would keep reduced pay and pensions coming, or reject it and be kicked out of the Eurozone of the 17 countries using the euro and get no money at all. You want to be burned at the stake or have your head chopped off? It was, as critics rightfully said, a blackmail referendum that he had to withdrew under pressure from European leaders and Greeks, and his own personal Brutus, Finance Minister Evangelos Venizelos, who deserted him, while licking his chops at the prospect of becoming Greece’s Caligula if he could only get elected next year when the coalition government stops and new elections are held. PASOK is getting about 15 percent of the vote now in surveys and Venizelos is the butcher who instituted a raft of new tax hikes, including a shameful assessment on the poor while letting his rich friends escape as tax evaders, so his chances of getting top billing on the marquee are equivalent to those of the Greek soccer team winning the next World Cup.
Papandreou turned out to be a method actor, in a supporting role, because he couldn’t rise to the level of a star and his character would have been a minor figure for Euripides. But at least he didn’t wind up a comic joke like his Deputy Prime Minister Theodoros Pangalos, who disappeared from the stage once Venizelos came on. Reduced to doing nothing except using his mobile phones at a reported cost of $57,000 a year, as Papandreou and Samaras were at center stage, Pangalos was in the wings. He was last seen strolling into a southern Athens resort, pushing past the gates and walking in without paying, leading an elderly woman to scream at him. He responded by pushing her, just the way Merkel did to Papandreou before he, too, fell. Maybe it was a worthy drama after all, but the curtain has come down on Papandreou.