No Discounts for Greek Art at Sotheby's and Bonhams 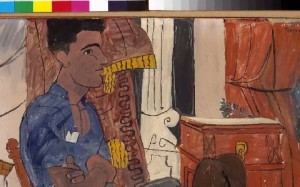 The poor economic circumstances that we are under have also an influence on the upcoming Greek Sales of Sotheby’s and Bonhams on November. Terpsichori Agelopoulou, responsible for Greek Sales of Bonhams stated, ‘We can neither plan nor estimate, yet if we had to compare the ongoing economic crisis with previous ones, the we can reach the conclusion that the art always constitutes an investment and art objects are subject to a constant value”.
The adjustment of the prices during the crisis is of great importance at Bonhams. Last year, when the crisis had a bad influence on sales during auctions (63% during spring Greek sales), the prices got much lower.
The prices for the upcoming auction of 21 November were formed, based on the following criteria: The prices of artifacts that did not face a decrease remained as they were. For example, the prices of the artifacts of Moralis, Stamos, Akrithakis, Tsarouchis and Gaitis were not further decreased.
Among the best pieces are “Erotic” of Yiannis Moralis, whose estimated worth lies between 295,000-400,000 euros, ‘Perseus and Andromeda, by Alekos Fassianos (210,000-290,000 euros) and Gyzis work “Eros and the Painter” estimated at 140,000-200,000 euros.
These pieces will also be exhibited in ‘Athenais’ Art Place in Athens (Str.Kastorias 34-36, Votanikos) on 8th, 9th, and 10th of November.