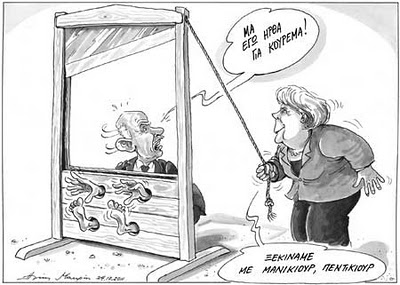 According to Reuters, the harsh austerity measures imposed by the German mechanisms on the Greek people have revived historical enmities and many Greeks are beginning to compare the current circumstances to the Nazi Occupation of Greece during World War II.
On the occasion of the “Oxi” celebrations in Greece on the 28th of October tension seems to rather escalate. Some Greeks have started to resent German tourists travelling to Greece, while some media persons have called the Greek PM “dosilogos”.
Reuters reported that many Greek cartoonists depict EU task forces on Greece “as ferocious soldiers in World War Two German uniforms”.
The Occupation of Greece back in the 1940s becomes a touchy subject of the present due to the terrible financial circumstances of debt-hit Greece and the consequent social turmoil.
According to Reuters, for ordinary Greeks, the German presence in their affairs is chilling, while many have called on Germany to bail out Greece “on the grounds it owes Athens money for war atrocities in the past”.
Deputy Prime Minister Theodoros Pangalos had also referred to the gold taken by Nazi Germany from the Greek central bank and has never been returned. Germany refused to comment on that complaint.