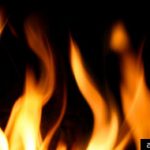 Kirsty Theologo, 18, and her 16-year-old friend named only as Bronwyn were attacked in the early hours of Saturday at a remote beauty spot in the Linmeyer suburb of Johannesburg.

Today, Miss Theologo was at a Johannesburg hospital in an induced coma after suffering burns to 75 percent to her upper body while Bronwyn was under medical supervision at a private clinic.

South Africa’s Star newspaper reported that their attackers set them ablaze after deciding to turn them into satanic ‘sacrifices’.

While she was burning, one boy cut her hand and held it over a Bible so that the blood could soak it, according to one of the girls who was in the group, the paper said.

A 16-year-old girl tried to put out the flames by rolling Kirsty Theologo in the sand, burning herself in the process, the paper said.

Provincial police spokeswoman Captain Pinky Tsingane said the girls had been tied up and there was speculation the attack was a satanic ritual. Two men aged 19 and 21 who took part in the incident turned themselves in on Sunday.