Conference on Theological Tourism in Cappadocia 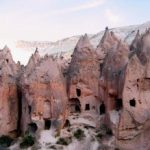 The Non-Governmental Organization ‘Aegean Polis’ is going to organize an international Symposium on Theological Tourism in March 2012 in Cappadocia, under the initiative of the Turkish Government and academics from Turkey.

The common purpose of the imminent Symposium is the broadening of the cooperation possibilities between Turkey and Greece in order to create a culture of solidarity between the two countries that share the Agean sea.

The President of ‘Aegean Polis’ Marianna Zimpara underlined that cooperation between Turkey and Greece depends on the existing solidarity and interdependence between both countries.

“Within the ongoing crisis of the financial system such initiatives prove that there are still countries who struggle against poor economic circumstances in order to promote the dynamic of their culture in general”, Zimpara concluded.