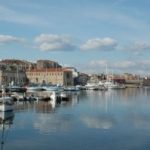 BBC Channel Members arrived at the island of Crete, in Chania and started shooting scenes at places that cruise tourists visit under the guidance of producer Paddy Wivell.

The shooting of the documentary’s episodes took place at Apokoronas, at the Old Town’s Cape and the Venetian Port of Chania.

The script of the BBC documentary revolves around an elderly couple after 40 years of marriage decide to go on a cruise in Mediterranean Sea. The cruise trip involves visits to Corfu, Chania and Santorini Islands with Venice as the final destination.

The Municipality of Chania along with the Greek Embassy provided assistance to BBC during the shooting of scenes in Chania.

The culture adviser in Chania, Maria Kokkinaki stated, “The advertising of our municipality, of the old town and the Venetian port are significant during current circumstances that we are under”.

“This documentary contributes to the advertising of the whole country to the British Market”, Kokkinaki concluded.