After the Haircut, What Next for Greece? 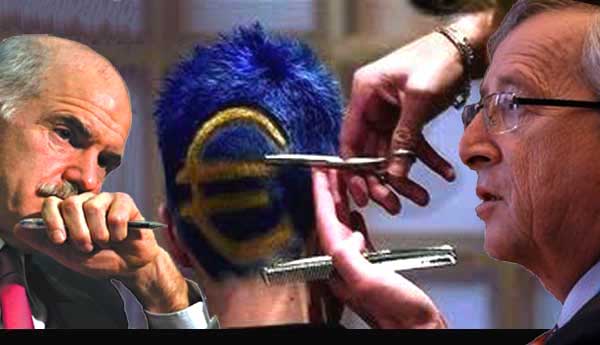 ATHENS –  The signs are all there that investors have really given up on Greece: analysts no longer say “if” when talking about the prospect of a default, but “when,” and Luxembourg’s Prime Minister Jean-Claude Juncker, the head of the Eurozone, the 17 countries who use the euro as a currency has acknowledged that losses for banks and institutions who’ve put their money into Greece could be as high as 60 percent.
Greek banks have a 30 percent exposure to Greek bonds and debts, and face possible collapse or nationalization under the worst case scenario as the Eurozone scrambles to see whether to give Greece a second bailout of $157 billion, in which investors agreed to take a 21 percent buzz cut. The first bailout, for $152 billion, failed because the pay cuts, tax hikes, slashed pensions, and layoffs demanded by the Troika of the European Union-International Monetary Fund-European Central Bank created a deep recession of 16 percent unemployment and the closing of 100,000 businesses as Greeks, scared out of their socks, stopped spending.
Without at least a 50 percent haircut, the second bailout could swell to as much as $350 billion or even an astronomical $600 billion, more than the total reserves of the European Financial Stability Facility (EFSF), leading Jans Weidmann, President of Germany’s Bundesbank, to say even if investors write off half their losses or more it would not help Greece and could even be dangerous if the country stopped trying to reduce its $460 billion – and climbing – debt.  “A haircut is not an cure-all,” Weidmann told Sunday’s Bild am Sonntag newspaper. “If it were to lead to a reduction in the readiness to implement structural reforms, it could even be dangerous.”