GRNews
GreekReporter.comEurope20th Anniversary of the Enthronement of Ecumenical Patriarch Bartholomew

20th Anniversary of the Enthronement of Ecumenical Patriarch Bartholomew 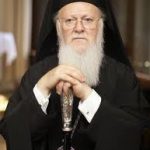 The Archbishop of America, Demetrios organized a dinner event in Constantinople celebrating 20 years since the enthronement of His All Holiness Ecumenical Patriarch Bartholomew.

Also in attendance were the Patriarchs of Serbia and Georgia Irenaios and Ilias respectively, the Archbishop of Albania Anastasios, hierarchs of the Ecumenical Patriarchate in Constantinople from Europe, USA, Crete and Dodecanese, and foreign ambassadors to Ankara.

The American President Barack Obama, the President of Turkey Abdulah Gul, the Prime Minister of Turkey Tayyip Erdogan and the foreign ministers of USA and Turkey, Hilary Clinton, and Ahmet Davutoglu respectively took part in the dinner event by sending congratulations messages to the Ecumenical Patriarch.