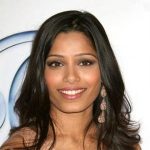 Actress Freida Pinto plays the role of Phaedra in visionary director Tarsem Singh’s stylish and spectacular 3D action adventure IMMORTALS which opens on November 11. Trained as a priestess since birth, Phaedra is a gifted Oracle, capable of divining glimpses of the future, but unable to control or even interpret her visions.

IMMORTALS producer Mark Canton knew they’d found their Phaedra in Pinto, a young actress of Indian descent who had just made her film debut in the Academy Award-winning film Slumdog Millionaire.

Producer Gianni Nunnari agrees: “There are certain actors or actresses that grow within the time of the shooting and that was Freida”.

“People might expect that because it’s a Greek film, she would be Greek, but that’s not what I envisioned. When I met Freida I just said, she’s it.”

Phaedra has lived all of her life in the company of her fellow priestesses and is reputed to have an especially strong gift for clairvoyance. But her visions, while accurate, are ambiguous. “It’s a very disturbing experience for her, because she doesn’t know exactly what will happen,” explains Pinto.

For her first big studio film, Pinto says she feels lucky to have had Singh to guide her. “When you work on a film like this, the emotions that you go through are so explosive. I’m just so excited, and that’s exactly what I want the audience to feel”, Pinto concludes.

A new border surveillance drone, which represents the next generation of unmanned surveillance aircraft, will be manufactured by a Greek firm.
Australia