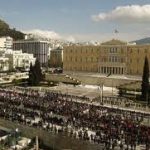 by: Katerina Palamiotis
A day after the approval of new even harder cutbacks by the Greek Government of socialists, a new wave of strikes planned by the labour unions is about to begin next week.
A few hours ago, the secretary-general of the ADEDY union, Ilias Iliopoulos, declared that the new law “will not be implemented,” and accused the government and PM Papandreou of ignoring the general sentiment of dissent.
The bill voted yesterday includes new measures demanding further pension and state salary reductions, civil service staff cuts and a reduction in the tax-free threshold.
Today, Greek ferry seamen, municipal workers and nurses are on strike.

ISS Greece, an adoption agency which once catered to thousands of foreigners, is now in the process of digitizing their records.
Cyprus

Halloumi and Feta may just be the most iconic food products from their respective countries of origin, Cyprus and Greece.
Culture